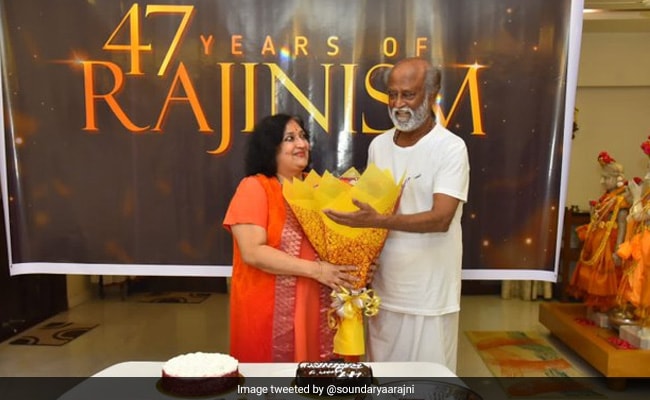 Superstar Rajinikanth completed 47 years in cinema and to celebrate the special occasion, his daughters Aishwaryaa, Soundarya shared posts from the in-house festivities. Soundarya Rajinikanth, sharing pictures of the legendary actor along with his wife Latha, wrote in her post: "Our lovely Jilluma... Appa's greatest fan and the superstar of our family Latha Rajinikanth." In a separate post, she wrote: "47 years of pure magic ! You are God's child dearest appa. You are an emotion that words cannot explain. Love you Thalaivaaa #47YearsOfRajinism."

Our lovely Jilluma .. Appa's greatest fan and the superstar of our family @OfficialLathaRK@rajinikanth@ash_rajinikanthpic.twitter.com/ccxVeoWRMW

47 years of pure magic !!! you are gods child dearest appa !!!! You are an emotion that words cannot explain !!!
Love you Thalaivaaa #47YearsOfRajinismpic.twitter.com/b4bzmcYLzz

Meanwhile, Aishwaryaa Rajinikanth shared these photos and she wrote: "76 years of independence. Saluting sacrifices, struggles and strength... Proud Indian. 47 years of Rajinism ... Sheer hard work grit and dedication. Proud to born to him." She added the hashtag #prouddaughter.

Rajinikanth married Latha on February 26, 1981. Rajinikanth debuted in the film industry in 1975 with Apoorva Raaganga. He has starred in over 160 films, most of which are in Tamil. Rajinikanth was honoured with the Padma Bhushan in 2000 and the Padma Vibhushan in 2016. In 2021, he received the Dadasaheb Phalke Award for his contribution to Indian cinema.

Rajinikanth was last seen in Annaatthe, which released on Diwali last year. Besides Rajinikanth, the film featured Nayanthara and Keerthy Suresh. The veteran actor's next project is filmmaker Nelson's Jailer.