Rahul Vaidya Is Missing Disha Parmar In Cape Town. See What He Posted 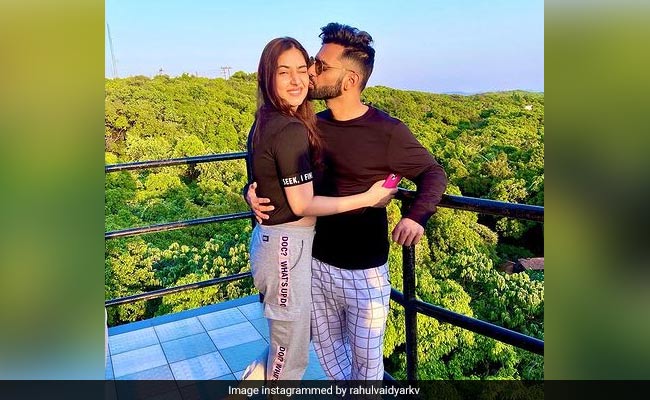 Rahul Vaidya surprised fans with a mushy Instagram post featuring his fiancée, actress Disha Parmar. The singer is currently shooting for the stunt-based reality show Khatron Ke Khiladi season 11 in Cape Town. However, Rahul did not forget to profess his love for Disha even if they are miles apart. In this throwback snap, the couple is twinning in black. “Miss You,” he wrote in the caption. Pat came the reply from Disha and it goes like this, “Me more.” The upload has garnered over 3 lakh likes overnight.

Rahul often shares updates from the sets of the reality show. Recently, the 33-year-old posted a photo in orange sporty wear. “Don't tell them your dreams...Show them the results,” his caption read. Disha seemed to be super impressed with the post and she wrote, “Hawtie”, in the comment space.

A while back, his goofy clicks with the show's co-participants grabbed the attention of the social media users. Rahul was a part of the off-screen photo shoot with contestants Arjun Bijlani, Divyanka Tripathi, Anushka Sen, Sourabh Raj Jain and Aastha Gill. “Khiladis,” Rahul wrote in the sidenote along with a special disclaimer, “For your information, stars rule is my mantra of life which my T-shirt reads. Mask off only for clicking pics.”

Rahul was also in the headlines for his war of words with YouTuber CarryMinati (aka Ajey Nagar). The former Indian Idol sensation responded to CarryMinati's diss track on Bigg Boss 14. The Youtuber termed the singer as a “backbencher” in the video. In response, Rahul tweeted, “Kuch logon ka naam apne kaam se hota hai aur kuch logon ka naam auron ko badnaam karne se hota hai... CarryMinati, maza aya bro. [Some people get famous by their hard work, while some gain popularity by bad mouthing others])

Rahul was the first runner-up in Bigg Boss 14.

Kishwer Merchantt On Casting Couch: "A Big Filmmaker Told Me To Sleep With The Hero"