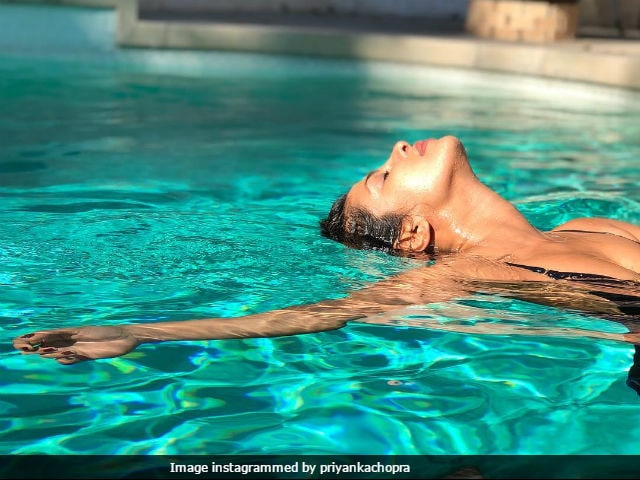 New Delhi: Actress Priyanka Chopra is a bonafide globe trotter. After hosting the Global Citizen Festival in New York, the 35-year-old actress is now in Los Angeles with pet pooch Diana. Priyanka Chopra has been filling her Instagram account with beautiful pictures which will definitely make you want to take a break from your busy schedule. Today, Priyanka delighted everyone by sharing a picture in which she is seen wearing a black swimwear and soaking in the sun while swimming in the pool. "Sunny LA.. the silence and I...love this," wrote the Dil Dhadakne Do actress. Doesn't Priyanka look radiant as always?

Sunny LA.. the silence and I... .this #iphone8 pic credit- @jazmasri

Earlier, Priyanka Chopra shared a sun-kissed selfie with her per Diana and the captioned the image as, "Looks like @diariesofdiana is jet lagged! Well I'm not! LA here we are!."

Looks like @diariesofdiana is jet lagged! Well I'm not! LA here we are! .

Priyanka Chopra currently has two upcoming Hollywood projects - Isn't It Romantic? and A Kid Like Jake. She is expected to begin shoot for the third season of her American TV show Quantico soon.

Quantico was renewed for the third season in May, despite low viewership and TRPs. Priyanka Chopra, who portrays the role of FBI recruit Alex Parrish, has twice won People's Choice award for her performance in the show.

Promoted
Listen to the latest songs, only on JioSaavn.com
This week it was announced that Priyanka Chopra has returned to Forbes List of Top 10 Highest Paid TV Actresses at position 8. Priyanka "takes advantage of her worldwide appeal," stated the Forbes report.