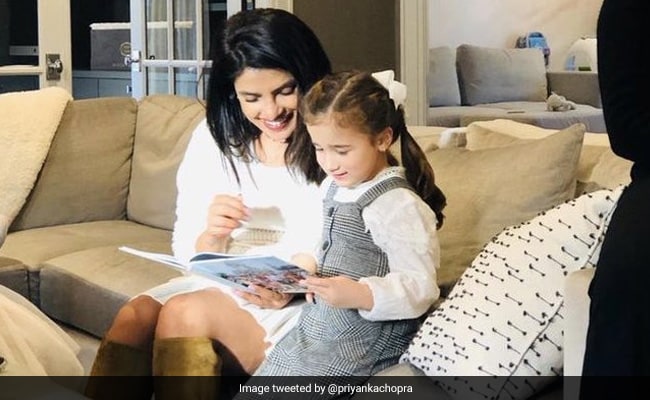 Happy birthday, Alena! Kevin Jonas and Danielle's elder daughter Alena's sixth birthday was made extra special by Priyanka Chopra with an adorable birthday wish. On Monday morning, the 37-year-old actress tweeted a cute little birthday greeting for Nick Jonas' niece Alena. "Happy 6th birthday, beautiful. You are very loved, Alena!" tweeted Priyanka Chopra. She zeroed in on a cuteness overloaded photo of herself with Alena. In the sun-kissed photo, Priyanka and Alena can be seen chilling together as they flip through the pages of a book. Kevin Jonas and Danielle are also parents to three-year-old daughter Valentina. Here's what Priyanka Chopra tweeted on Alena's sixth birthday:

Family first.. Mother's Day celebrations.. to my mom @madhumalati And all the amazing mothers who have been incredible influences in my life. Thank you and I'm so grateful.. just tell ur mom you love her.. give her a hug. Feel the love. Miss u mom

Priyanka Chopra recently attended the Grammy Awards with Nick Jonas. Ahead of that, she was spotted at the Golden Globes, where she was a presenter. On the work front, Priyanka Chopra will next be seen in Netflix film The White Tiger. She also has Netflix's superhero film We Can Be Heroes and a film with actress-comedian Mindy Kaling in the pipeline. Priyanka has also been reportedly roped in as part of the cast of Matrix 4. Priyanka will also host a sangeet-themed show with Nick Jonas for Amazon.