Priyanka Chopra Reveals How Her Grammys Dress Stayed In Place

"When I decide to wear an outfit, I'm not someone who's really nervous because when I walk out of the door, I'm very secure," said Priyanka 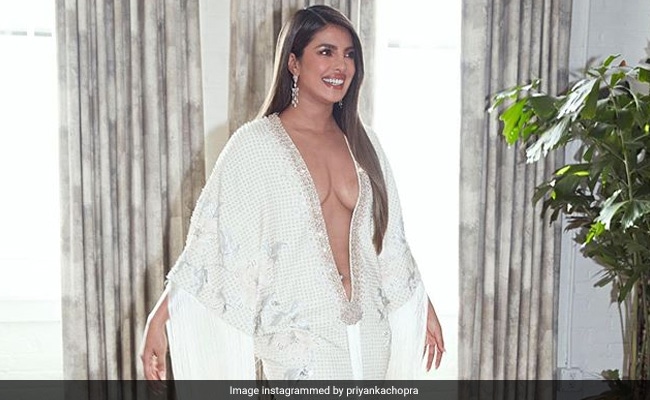 The Internet is still talking about Priyanka Chopra's Grammys red carpet outfit. Wasn't it stunning? Priyanka turned heads in a Ralph and Russo gown, with a plunging neckline. Days later, in an interview with US Weekly, the 37-year-old actress revealed how designers Tamara Ralph and Michael Russo made sure that there's no scope for a wardrobe malfunction at the awards. Priyanka revealed the secret detail that helped her prevent a wardrobe malfunction at the Grammys - a piece of "tulle," especially used by the designers for Priyanka's "skin tone" that held her dress together and wasn't even visible to camera.

"So as much as people might think it would be hard to manage, they found this incredible tulle the same colour as my skin tone and sort of held the dress together with that," the actress told the publication and added: "So you can't even see it in the pictures but there was no way it would have happened if they didn't have that. It was like netting."

Priyanka added that the designers always keep wardrobe malfunctions in mind while making an outfit for her. "Ralph and Russo, whenever they make couture for me or custom outfits for me, they always do them fitted to my body, keeping these things (wardrobe malfunction) in mind," said Priyanka.

The Baywatch actress went on to reveal that she doesn't take fashion risks and never walks out of the door unless she's "super secure" about her look. "When I decide to wear an outfit, I'm not someone who's really nervous because when I walk out of the door, I'm very secure," said Priyanka, adding: "I don't leave unless I'm super secure. I don't like wardrobe malfunctions! Nobody does!"

Other than her red carpet outfit, Priyanka Chopra also trended incessantly for her dress that she wore at Clive Devis' exclusive pre-Grammys party - a satin gown by designer Nicolas Jebran.

Take a look at what Priyanka wore at the Grammys and at the pre-Grammys bash:

On the work front, Priyanka Chopra was last seen in Shonali Bose's The Sky Is Pink. She has signed a couple of films, including Netflix's We Can Be Heroes and the adaptation of Aravind Adiga's The White Tiger. She may also join the cast of Keanu Reeves' Matrix 4. Priyanka will also be seen in a film alongside comedian-actress Mindy Kaling.