Grammys 2020: Priyanka Chopra's Dress Vs Jennifer Lopez's Iconic One From 20 Years Ago

Grammys 2020: Priyanka Chopra showed up on the Grammy red carpet in a white Ralph and Russo gown 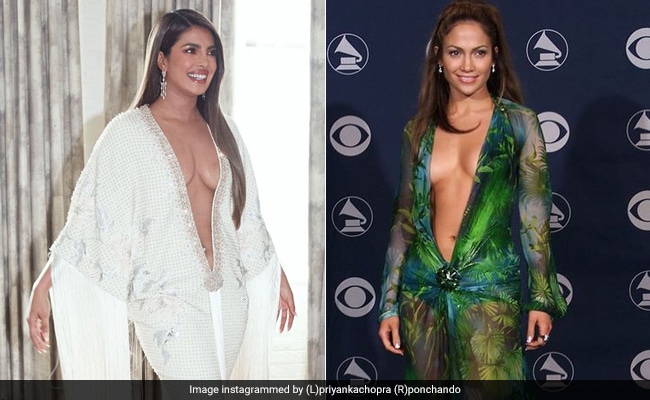 Exactly 20 years after Jennifer Lopez stopped traffic at the Grammy Awards in a now-iconic green Versace dress with a neckline that dipped beyond her navel, Priyanka Chopra showed up on the Grammy red carpet in a white Ralph and Russo gown that featured an equally plunging neckline. In no other way are the two dresses similar - Jlo's dress was made of sheer tropical print fabric and revealed most of her legs; Priyanka's pure white outfit was embellished with tassels and diamante. But there's no looking past the plummeting front, especially when the first dress has been seared into fashion-pop culture the way it has.

This channelling of Jennifer Lopez, deliberate or otherwise, did not escape Twitter, which had some thoughts on how Priyanka did versus the original, not much of it good.

I hate her dress so much ugh yikes Priyanka thought u could pull off a similar Jlo jungle dress?! https://t.co/y9Vnl0euAT

priyanka's dress looking like the white version of jlo's dress

Priyanka's dress was too ..... much. Too.... wanna be jlo... too much trying to start a convo. It was cringe. Sophie Turner's outfit was A+ .... but Ariana was best dressed. #GRAMMYs#RedCarpet