Priyanka Chopra And Nick Jonas, On Italian Getaway, Show The 'Way Of Love'

After the Jophie wedding, Priyanka Chopra and Nick Jonas jetted off to Italy. 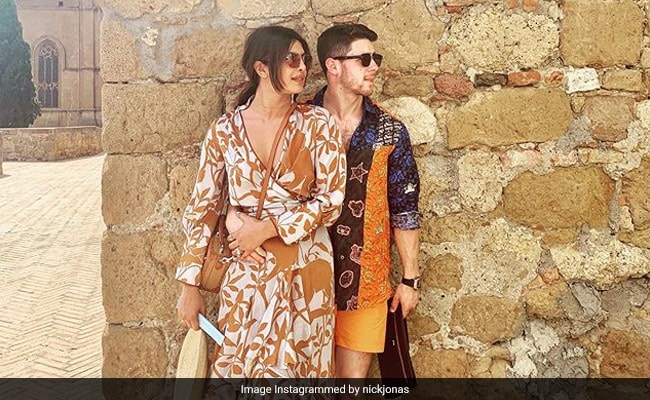 Priyanka Chopra and Nick Jonas jetted off to Italy after Sophie Turner and Joe Jonas spectacular France wedding. The 26-year-old singer shared a picture from his visit to Via Dell Amore (The Way of Love in English), a pedestrian street with a picturesque view. Priyanka looked nice in a printed wrap-dress while Nick Jonas opted for summery separates complementing his actress wife. Priyanka Chopra added a heart-eyed emoticon in the comments section of Nick Jonas' post, which read: "Via Dell Amore... or Love Way in other words." The Jonases spent a super busy weekend at the Jophie wedding and this vacation give Priyanka and Nick ample time together before they get busy with their respective hectic work schedules.

Here's the picture of Nick Jonas and Priyanka Chopra showing their fans the 'Way of Love':

Priyanka Chopra recently completed filming The Sky Is Pink in India and she will soon get busy with her project in collaboration with Mindy Kaling. Priyanka and Mindy are making a film on an extravagant wedding.

Meanwhile, Nick Jonas, who revived music band The Jonas Brothers with his siblings Joe and Kevin, is all set to embark on the 'Happiness Begins' tour with them. Nick Jonas has also signed up for the sequel of Jumanji: Welcome to the Jungle and for Chaos Walking.