Priyanka Chopra And Nick Jonas' Band Baaja Baaraat: 'Are You Comfortable On A Horse?' She Reportedly Asked Him 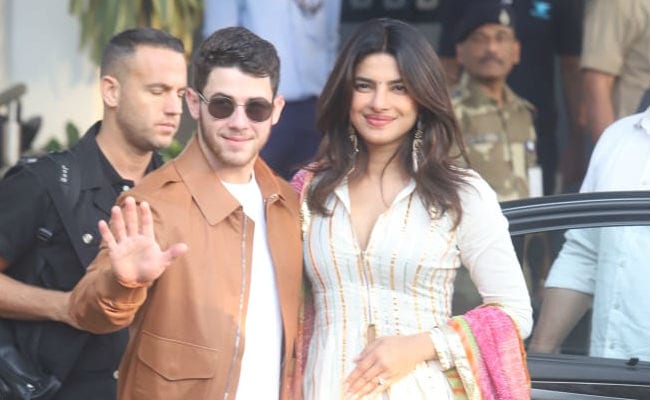 Priyanka Chopra and Nick Jonas photographed at the Jodhpur airport.

Any time now dhamakedaar photos from Priyanka Chopra and Nick Jonas's pre-wedding ceremonies will hit the Internet. Before that Vogue magazine published excerpts from an interview with Priyanka and Nick, in which Priyanka said that Nick Jonas will be dressed in traditional Indian outfit and that there will a baaraat procession - "Are you comfortable on a horse?" Priyanka asked Nick, who replied: "I am... I can't wait." (Honestly, neither can we!). Nick Jonas and Priyanka Chopra will get married as per Hindu rituals on December 2 in Jodhpur (the couple and their families are already there). A Christian wedding is scheduled for December 1.

In the aforementioned Vogue interview, Priyanka and Nick talked about their relationship and how their love story started.

It started with a direct message from Nick to Priyanka on Twitter, in which he said 'I'm hearing from a few mutual friends that we should meet.' "She responded day of with a message that said, 'My team can read this. Why don't you just text me'," Nick Jonas said. Over the next few months Priyanka and Nick exchanged several text messages and met at a few parties. And then, one day Nick Jons was invited to Priyanka's New York apartment.

"We hung out for a couple of hours," Priyanka told Vogue. "He patted my back before he left." Nick Jonas added: "There was no kiss. There was nothing." Vogue reported Priyanka reiterated that "with a look of pure incredulity on her face" and Nick said: "She's still upset about that... Your mom was in the house! I thought it was a respectful first night."

"It was too respectful if you ask me," Priyanka replied.

Previous media reports stated that Nick Jonas proposed to Priyanka on her birthday in July but as per the couple but in the interview Nick said he waited until after midnight to ensure that their future engagement celebrations did not coincide with birthday parties.

Nick Jonas proposed to Priyanka in Crete. She thought it was just her birthday trip.

Nick Jonas told Vogue: "I got down on one knee, again, and I said, 'Will you make me the happiest man in the world and marry me?' No joke - she took about 45 seconds." Priyanka says she was speechless and then Nick went ahead and said, 'I'm going to put this ring on your finger now unless you have any objections.'

However, this was not the first time when Nick Jonas got down on one knee for Priyanka Chopra. Almost one year before the big proposal, at Vanity Fair Oscars party, Nick Jonas said this happened - "I put my drink down, get on one knee - this is in front of a bunch of people - and I say, 'You're real. Where have you been all my life?' Like, loud."