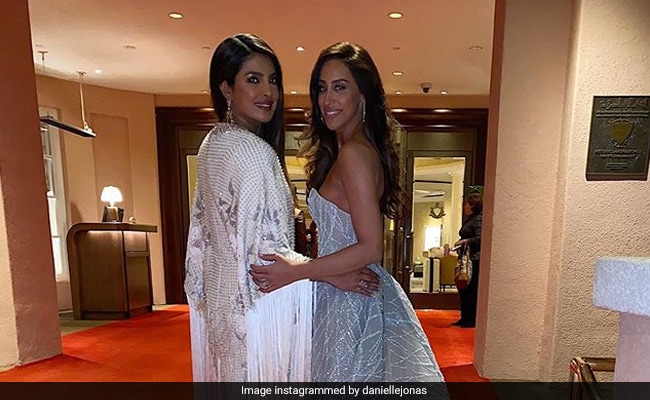 Priyanka and Danielle at the Grammys (courtesy daniellejonas)

Priyanka Chopra went to the Grammys, made a bold and beautiful statement in a Ralph and Russo dress, impressed the fashion police, upset some on the Internet and had a fam-jam with the J-sisters. Days later, a glimpse of just how much of a blast Priyanka had at the 62nd edition of the Grammys was shared by Kevin Jonas' wife Danielle, who shared a few of her favourite photos on Instagram. Describing her and Priyanka's red carpet look, Danielle wrote: "Disney princess moment at the Grammys." Priyanka, who was quick to spot the photo, thought that Danielle looked like princess Elsa from Disney's animated film Frozen."Adorable! You are totally Elsa," commented Priyanka.

While Priyanka's Ralph and Russo ensemble with a plunging neckline turned out to be the talk of the hour, Danielle was stunning her own way, in a metallic off-shoulder dress with a long train. Swipe to see more of Priyanka and Danielle's "Disney princess" moments.

disney princess moment at the Grammys

Priyanka, who accompanied husband Nick Jonas to the Grammys, had shared this fam-jam photo from the awards gala, also featuring Joe Jonas and his wife Sophie Turner. "So proud of this fam. Congratulations, Jonas Brothers. You guys crushed it today," she wrote. The Jonas Brothers, who had a Grammy nomination, performed at the Grammys.

Priyanka Chopra recently featured in the Jonas Brothers' What A Man Gotta Do video, which also stars Danielle and Sophie Turner. On the work front, she will next be seen in Netflix film The White Tiger. She also has superhero film We Can Be Heroes and a film with comedian Mindy Kaling in the pipeline. Priyanka may also be part of the cast of Matrix 4. Priyanka is also part of Amazon's web-series Citadel and will host a sangeet-themed show for Amazon Prime.