"Achan. 24 years," the actor wrote in the caption. Malayalam superstar Prithviraj took his fans down memory lane as he shared a photo of his father, veteran actor Sukumaran on his Instagram. Prithviraj shared the vintage photo on the late actor's 24th death anniversary. Along with the photo, Prithviraj wrote, "Achan. 24 years," followed by a heartbreak emoji. Several actors from the Malayalam industry including actress Manju Warrier and Ahaana Krishna "liked" the photo, while actress Ann Augustine left a heart in the comment section. Sukumaran is considered one of the most prolific actors to have graced Malayalam cinema. He died following a heart attack at the age of 49.

Prithviraj's brother, actor Indrajith also shared a portrait of their father and wrote, "Forever in our hearts!"

He also shared a throwback photo of the two brothers as children, sitting on Sukumaran's lap, in his Instagram Stories. 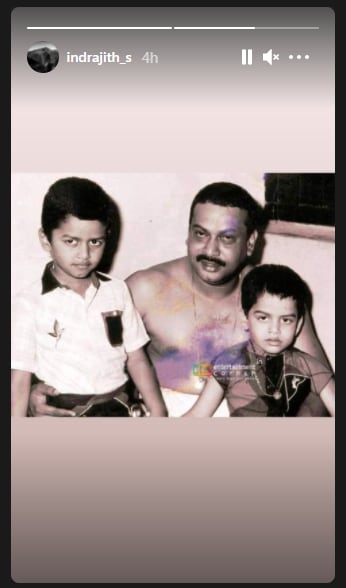 Recently, Prithviraj had shared another vintage picture featuring his father in the company of Mohanlal, director Mani Ratnam and cinematographer Ravi K Chandran. The photo was taken on the sets of the 1984 Malayalam movie Unaru. The image features Mani Ratnam and Ravi Chandran shooting a scene with Mohanlal as Sukumaran watches on.

After a successful career as a hero, Sukumaran seamlessly adapted to playing supporting and antagonist roles in several iconic Malayalam films. He even bagged the Kerala state award for his performance in the film Bandhanam.

Indrajith, Sukumaran's elder son, is best known for his work in films such as Classmates, Amen, and  Left Right Left. Prithviraj, on the other hand, is considered one of the most successful stars of his generation with several hits to his credit including  Ennu Ninte Moideen, Classmates, Ayalum Njanum Thammil and Indian Rupee. He turned director with the Mohanlal starrer Lucifer, which is the highest-grossing Malayalam film of all time.