Hopefully, Priyanka Chopra will soon share pictures from her Christian wedding, which was held today 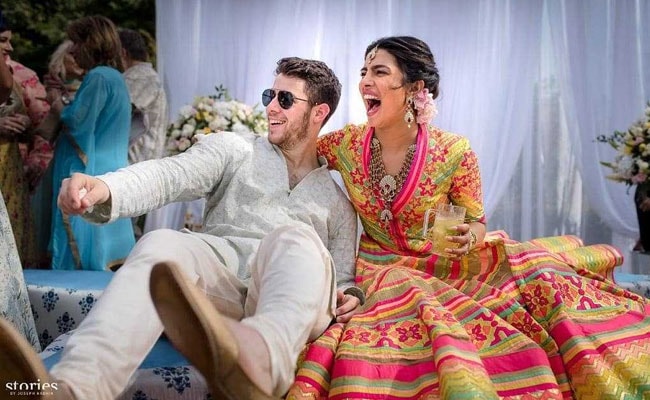 Priyanka Chopra and Nick Jonas photographed at their mehendi ceremony.

Hours after Priyanka Chopra and Nick Jonas exchanged wedding vows in a Christian ceremony, the 36-year-old actress treated her fans to photos from her mehendi ceremony, which she says is "an important part for the girl in an Indian wedding." Priyanka married singer Nick Jonas in Jodhpur on Saturday, however, the mehendi ceremony was held in the same venue on Friday afternoon. Priyanka shared some photos on Instagram and wrote: "One of the most special things our relationship has given us is a merging of families who love and respect each others' faiths and cultures. And so planning our wedding with amalgamation of both was so, so amazing... Once again we made it our own and it was afternoon that kicked of the celebrations in the way we both dreamed."

Here are photos from the mehendi ceremony:

One of the most special things that our relationship has given us is a merging of families who love and respect each other's faiths and cultures. And so planning our wedding with an amalgamation of both was so so amazing. An important part for the girl in an Indian wedding is the Mehendi. Once again we made it our own and it was an afternoon that kicked off the celebrations in the way we both dreamed. @nickjonas

We hope Priyanka shares pictures from her christian wedding ceremony soon. Priyanka wore a customised Ralph Lauren gown for the wedding and Nick too was dressed in the same label. Outfits for the Chopras and the Jonas' were all courtesy of Ralph Lauren.

Meanwhile, a second wedding ceremony as per Hindu rituals is scheduled for tomorrow.

Priyanka Chopra and Nick Jonas' Christian wedding was attended by the Ambanis, Arpita Khan Sharma and YouTuber Lilly Singh, among others. Arpita arrived in Jodhpur in time for the mehendi but Nita and Mukesh Ambani along with their daughter Isha, son Anant and his rumoured girlfriend Radhika Merchant landed in the evening in time for the sangeet.

The guests at the wedding have been asked not to bring mobile phones with the camera and the entry to the Umaid Bhawan Palace is strictly restricted by invitation.