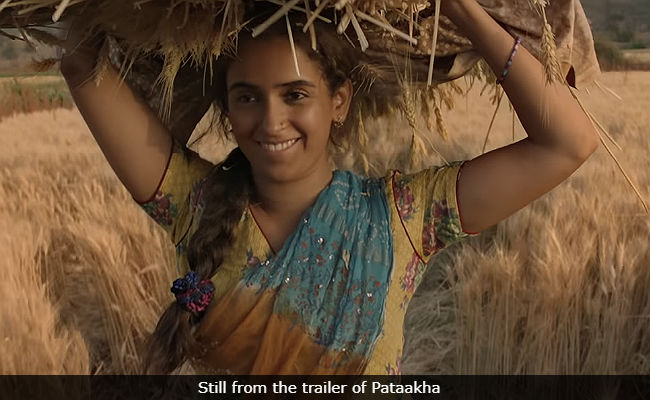 Sanya Malhotra in a still from Pataakha. (Image courtesy: YouTube)

Aamir Khan's protege (of sorts) Sanya Malhotra is all set for the release of her second film Pataakha, the trailer of which released on social media on Tuesday. The trailer of Pataakha and Sanya got Aamir Khan's blessings on Twitter shortly after the trailer went viral. "Loved the trailer Sanya!!! Your first film after Dangal!! Good luck and all the very best ! Love. a," Aamir Khan tweeted. Sanya Malhotra played Aamir Khan's onscreen daughter in 2016 blockbuster Dangal, which was based on the life of wrestler Mahavir Phogat (Aamir Khan) and his daughters Geeta (Fatima Sana Shaikh) and Babita (Sanya Malhotra). Apart from Dangal, Sanya played a special off-screen role in Aamir's Secret Superstar - she choreographed the 53-year-old actor in the song Sexy Baliye.

Loved the trailer Sanya !!! Your first film after Dangal !! Good luck and all the very best !
Love.
a.https://t.co/WmW874ns0l

Pataakha, directed by Vishal Bhardwaj, is the story of two sisters who cannot see eye-to-eye. Sanya plays one of the two warring sisters while Meri Aashiqui Tum Se Hi actress Radhika Madan features as the other sister. Pataakha tells the story of Badki and Chhutki, who are best when kept apart. Vijay Raaz plays their father, who decides to get one of his daughters married to a wealthy villager, whom both, Badki and Chhutki, detest. Badki and Chhutki elope and get married to their respective lovers on the same night only to find out that they are now sisters-in-law too.

Watch the trailer of Pataakha here: