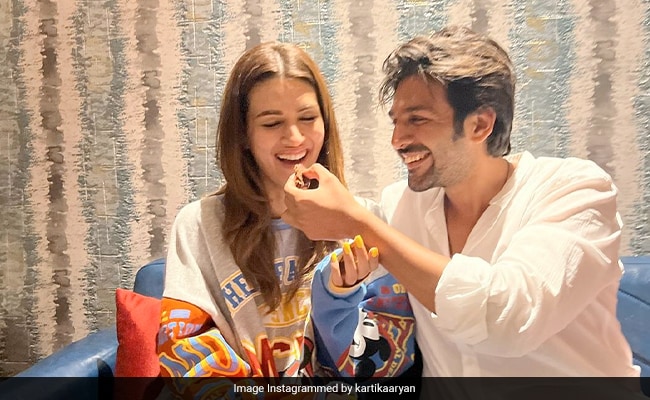 Happy birthday, Kriti Sanon. The actress, who is moving from strength to strength with career-defining performances and big budget projects, is being showered with love on social media by fans and well-wishers. Among the many posts wishing Kriti on the special day is a message from Kartik Aaryan, who will be seen with her in the upcoming film Shehzada. In an image shared by Kartik, he is feeding Kriti some cake on her birthday. Along with the photo, Kartik wrote, “Diet nahi todi ladki ne. Sirf pose kiya mere liye. Happy birthday Param Sundari. From your Shehzada ( The girl did not cheat on her diet. She just posed for me).”  And, the birthday girl didn't miss the cute wish. Referring to the cake, Kriti quickly replied, "Thank you for having all the cake after posing."

A few days ago, Kriti Sanon had shared a still from the film Shehzadaand announced in the caption that the movie will be out on February 10, 2023. “Mark your calendars to meet #Shehzada & Me,” Kriti said in the caption.

Shehzada is the official remake of Telugu film Ala Vaikunthapurramuloo. Kriti and Kartik will be reprising the role of Pooja and Allu Arjun in the original 2020 release.

A few weeks ago, Kriti Sanon and Kartik Aaryan shared a video in which they are discussing the humongous success of Kartik's last film Bhool Bhulaiyaa. Sharing the video, Kartik wrote in the caption: “Haters will say that I am forcing Kriti to Promote Bhool Bhulaiyaa 2. Kriti Sanon, my sweetest co-star.” With Kartik asking Kriti to perform the signature step from the title track, the actress jokes that the two will be promoting Bhool Bhulaiyaa till they begin to promote Shehzada.

Previously, Kriti Sanon and Kartik Aaryan have worked in the 2019 film Luka Chuppi.In addition to Shehzada, Kriti Sanon will also be seen in Bhediya, Ganapath and Adipurush.