"We are so thankful that you are family," wrote Nick Jonas' father Paul Kevin Jonas. 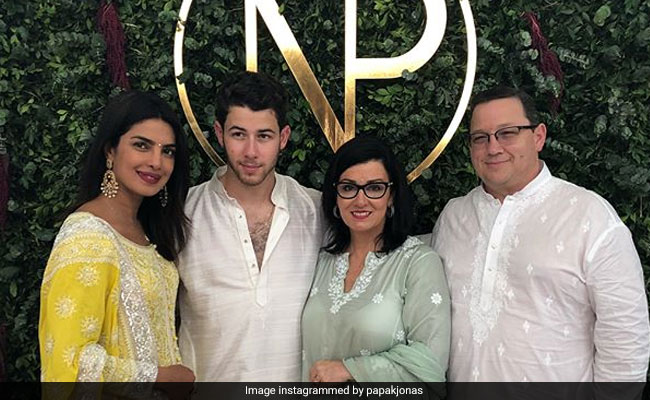 Priyanka with Nick and his parents (courtesy papakjonas)

On Priyanka Chopra's birthday, looks like the most touching birthday greeting arrived from Nick Jonas' father Paul Kevin Jonas. As Priyanka celebrated her 37th birthday on Thursday, Paul Kevin composed a heart-felt message for his daughter-in-law and Instagrammed it with two lovely photos: "Love you daughter-in-law Priyanka Chopra. We are so thankful that you are family. Thanks for making our son so happy," he wrote. One of the photos in Paul Kevin Jonas' post reminded us of Priyanka and Nick's mehendi ceremony from their December wedding. The Jonases and the Chopras wore Abu Jani Sandeep Khosla ensembles. The second group photo is from Priyanka and Nick's homecoming party in the US after their wedding.

Love you Daughter-in-law @priyankachopra . We are so thankful that you are family. Thanks for making our son so happy

Light of my world. My whole heart. I love you baby. Happy birthday.

Priyanka's mother Madhu Chopra's birthday post for her daughter will make you teary-eyed.

Holding you in my arms was priceless!! Love you my child

Sophie Turner, who is currently honeymooning with Joe Jonas in Maldives, sliced out time to send her "sister" some birthday love:

Danielle Jonas - Kevin Jonas' wife - wrote this beautiful message on Priyanka's birthday: "I hope your day is as bright and beautiful as you."

happy birthday @priyankachopra! i hope your day is as bright and beautiful as you love you!

Meanwhile, looks like Priyanka Chopra had a blast on her birthday, dressed in scarlet sequins. Here's what Nick Jonas shared on his Instagram story.

Priyanka Chopra's next confirmed project is Shonali Bose's The Sky Is Pink, which is expected to hit screens later this year.