Paatal Lok To Indian Matchmaking: 2020 Was The Year Of Trending Web-Series

While some web-series kept us on the edge of our seats, others had us imagining our ideal outfits once the pandemic ends 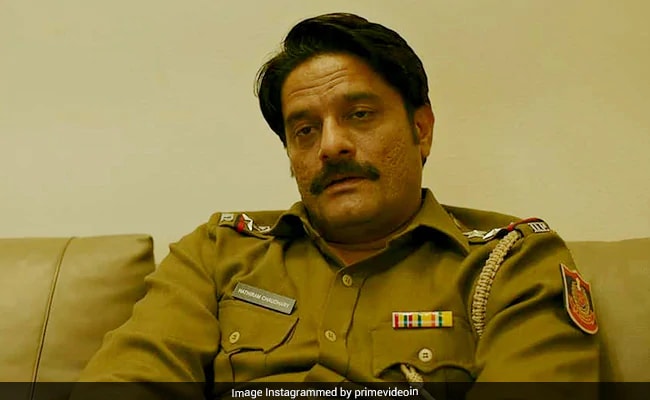 Jaideep Ahlawat in a still from Paatal Lok. (courtesy: primevideoin)

2020 might not have been a great year on most aspects but if there's one thing that we are thankful for (after the COVID-19 vaccines, of course), it has to be the plethora of web-series served to us on a platter. With the cinema halls being shut and no major releases for the longest time, these web-series took care of our entertainment needs - for every mood and season. There were shows and series to suit the sensibilities of almost everyone. While some kept us on the edge of our seats (Paatal Lok and Breathe: Into The Shadows need no introduction), others had us imagining our ideal outfits once the pandemic ends (Emily In Paris and The Fabulous Lives Of Bollywood Wives). There were also series like Bandish Bandits and A Suitable Boy to quench our musical thirsts. Here's to the web-series that trended in 2020 (raises virtual toast. Sigh!) Take a look at the list here. Happy reading!

Unlike its title, this Anushka Sharma-produced series was content heaven in every sense. The series that streamed on Amazon Prime Video during the first half of the year was a magic potion made of stellar performances, unforgettable dialogues and meme-worthy catchphrases. How can we forget "WhatsApp pe padha hai?" Inspector Hathiram Chaudhary aka Jaideep Ahlawat is the not-so-revered hero we deserve but never had because not all heroes wear capes, some of them dress in uniforms and travel in rickshaws to teach the goons a lesson, especially in matters involving their families. We don't know about heaven or hell in real life but Paatal Lok  is the place where you find a dog-loving hitman (Vishal "Hathoda" Tyagi), engaging chase sequences, elaborate backstories for every character, dark humour and a grey area. The show became an instant hit, garnering praises from stars, Mumbai Police and the audiences, of course.

Scam 1992 - The Harshad Mehta Story, showcasing the times of Harshad Mehta aka the "Bachchan of BSE," was as crisp as freshly minted notes when it started streaming on SonyLIV in October this year and it took the world of web by storm. Directed by National Award-winning filmmaker Hansal Mehta, the web-series was based on journalist Debashis Basu and Sucheta Dalal's book The Scam: Who Won, Who Lost, Who Got Away. The 10-episode series made a star of actor Pratik Gandhi. His body language and the heavy accent as the infamous stockbroker, won many hearts. Shreya Dhanwanthary's portrayal as Sucheta Dalal was another gift that the show gave us. The depiction of Harshad Mehta's journey from an ordinary man to the 'Big Bull' of Mumbai's Dalal Street was gripping in every sense. The only fraud over here would be missing this smash hit (fans will get the reference).

How does one describe a series, which was arguably one of the most awaited pieces of 2020? It's simple. One doesn't. One watches it. The Mirzapur feast began in 2018 on Amazon Prime Video. Two years and a few gunshots later, the excitement for the show remained intact. #Mirzapur2 was a hashtag that kept Twitterati busy for almost half the year till the show's arrival in October. Fans had no second thoughts of hopping onto this carpet (because Mirzapur, you know). You know what happens when Ali Fazal, Isha Talwar, Pankaj Tripathi, Shweta Triapthi, Divyenndu and Vijay Varma are at the same place, right? Firecrackers! Simply put, Mirzapur 2 is a land where revenge knows no fear.

Emily In Paris, a Netflix originals was a love story between a feisty Lily Collins and the City of Lights. The show garnered a huge fanbase instantly courtesy the stunning costumes, the millennial factors, unexpected friendships and the romanticisation of Paris. Let's also take a moment to acknowledge some of the best sartorial moments in the show, beginning with the Eifel Tower print top Emily wore in the pilot. The structural white dress she wore at the auction. The sunny yellow maxi and the black tulle dress. If there's one thing we can blindly trust the makers of Sex And The City with, it has to be great fashion and Emily In Paris delivered that and more. Here's an influencer we can't get enough of. We would totally follow Emily on Instagram. Duh!

What happens when pop meets classical? Well, a lot. This musical directed by Anand Tiwari, which streamed on Amazon Prime Video gave us two new stars in the form of Shreya Chaudhary and Ritwik Bhowmik, was an absolute treat. Not to mention the contribution of legendary actors like Naseeruddin Shah, Atul Kulkarni, Sheeba Chaddha, Rajesh Tailang. Besides the series, its tracks Chedkhaniyaan, Couple Goals, Sajan Bin, Mastiyaapa and the unforgettable "Sangeet Samrat" segment became a hit altogether. The human conflicts, recurring themes of jealousy, the coulourful landscapes gave the web-series a unique flavor, making it one of the most popular series of the season.

Special Ops, a Hotstar original, headlined by Kay Kay Menon, presented the story of the 19-year hunt for India's biggest enemy. The espionage thriller, which released earlier this year, starred Kay Kay Menon as RAW agent Himmat Singh, who is on the lookout for the main suspect in the 2002 Parliament attack. With the help of 5 agents played by Karan Tacker, Saiyami Kher, Meher Vij, Muzammil Ibrahim and Vipul Gupta, Kay Kay Menon starts his mission in 12 countries. With Neeraj Pandey's direction, gripping storyline, the series offers some nail-biting moments.

The Spanish series Money Heist season 4 was pretty much the talk of the town everywhere in the first half of 2020. The Netflix original known as La Casa de Papel in Spanish, was one of the biggest non-English originals to rule the world of web in the first few months of the year. With Bella Ciao on every tongue, and Professor memes taking over the Internet, the show definitely made a mark this year and its popularity needs no introduction. El Professor and team's reunion to save one of their own, obviously involved a heist and we are not complaining.

Never Have I Ever

You know the show is going to be replete with humour when Mindy Kaling is involved in it. This Netflix series is a coming of age teenage comedy drama that we can't get enough of. Loosely based on Mindy Kaling's own childhood, we can't help but fall in love with the show's protagonist Devi Vishwakumar (played by Maitreyi Ramakrishnan) as she navigates through highschool while embracing her awesome self. It is easy to see why Maitreyi Ramakrishnan was picked by Mindy Kaling from about 15,000 auditions. Besides the humour, the star of the show is its plot and the strong representation. The fact that the leading star as well her besties in the show are women of colour, speaks for itself. Also, nerds can be cool alright.

A post shared by Never Have I Ever (@neverhaveiever)

Breathe: Into The Shadows

Abhishek Bachchan gave it all to the show, which streamed on Amazon Prime Video. The actor made his big web debut count and how. The show's supporting cast Amit Sadh and Nithya Menen gave equally gripping performances. This 12-episode thriller is definitely not for the faint hearted. The series was a sequel to Breathe, which featured R Madhavan. To begin with, Breathe: Into The Shadows was the first of Abhishek Bachchan's many web projects. He later starred in Netflix film Ludo, in which the actor was also singled out for his stellar performance. To sum it up, the show was like a breath of fresh air, especially since it was Abhishek's first project after the 2018 film Manmarziyaan, directed by Anurag Kashyap.

The Fabulous Lives Of Bollywood Wives

Simply put, The Fabulous Lives Of Bollywood Wives can be described as an amalgamation of Keeping Up With The Kardashians and The Real Housewives Of Bevery Hills, altered a bit to suit the Indian sensibilities. The show that began streaming on Netflix in November and it occupied a top spot on the Indian trends list of the streaming giant for quite some time. The show was based on the lives of (no points for guessing) star wives Maheep Kapoor( Sanjay Khan's wife), Seema Khan( married to Sohail Khan), Neelam Kothari (Sameer Soni's wife) and Bhavana Panday (married to Chunky Pandey). Bling Bollywood parties, multiple cameo appearances by stars, the collective humour of all the dads in show and the Doha vacation were the highlights. Not to mention the peek-a-boo moments by Karan Johar and friendships that gave us goals (over 25 years).

When it comes to Indian Matchmaking, there's only one rule - you can love it, you can love hate it but you just can't ignore it. There are no spoilers in the show, as the title suggests. The series that streamed on Netflix became the center of attention courtesy the never-ending stock of memes and the flak that it received on social media. The show followed the journey of Sima Taparia, a matchmaker from Mumbai, as she tried to find the ideal matches for her clients trying to be a part of the arranged marriage institution. The show did, however, raise eyebrows and a plethora of questions about the casual misogyny, fair-skin obsession and the fading lines between what's real and what's scripted (in terms of the show). Nevertheless, the show managed to remain in the trends list.

2020 did offer us a lot more in terms of web-series than we listed above. To begin with, there was the surprise package Masaba Masaba, starring designer Masaba Gupta and her veteran actress and mother Neena Gupta. The Netflix series was uber-cool with fresh humour, the semi-fictionalised plot and Neena Gupta's Aunty Kisko Bola song. Aarya, a Disney+Hotstar presentation was kind of special too for it marked Sushmita Sen's acting comeback and her digital debut. It was hard not to love the trio Raghubir Yadav, Neena Gupta and Jeetendra Kumar in Amazon Prime Video's Panchaayat. Mira Nair's adaptation of Vikram Seth's novel A Suitable Boy, brought to life on Netflix was worth a watch too and the song tracks of the series were a class apart.

Which web-series did you like the best? Let us know using the comments section below.