A Mirzapur 2 Catch-Up With Guddu, Kaleen Bhaiya, Munna And A Tyagi Twin

"An evening with Guddu, Tripathis, Madhuri and... wait! Is that Bade or Chhote Tyagi," wrote producer Ritesh Sidhwani 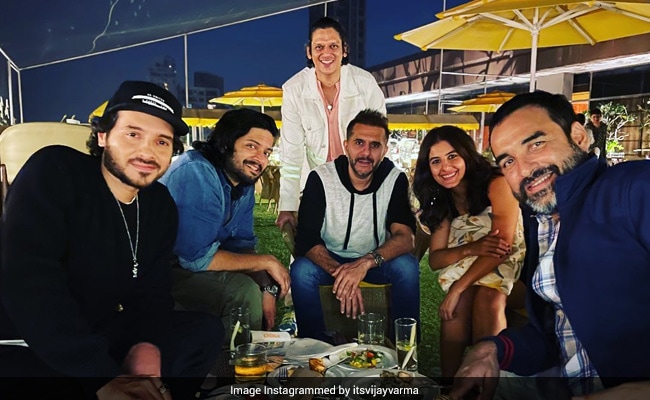 The stars of Amazon Prime Video's Mirzapur 2 united for a perfect picture, which was shared by actor Vijay Varma, who plays the roles of Bade and Chhote Tyagi in the show. Other Mirzapur stars present at the get-together were Ali Fazal, Isha Talwar and Pankaj Tripathi and the show's producer Ritesh Sidhwani. Vijay Varma, referring to the names of the characters in the show, wrote: "Mirzapur 2 ki party mein aapka swagat hai. Yahaan Tripathi, Pandit aur Tyagi, sab ek table pe paye jaate hain," Meanwhile, Ritesh Sidhwani also shared the same picture on his profile and he captioned it: "An evening with Guddu, Tripathis, Madhuri and... wait! Is that Bade or Chhote Tyagi?"

Mirzapur 2 has been directed by Mihir Desai and Gurmmeet Singh. The show has been co-produced by Farhan Akhtar, Ritesh Sidhwani, Kassim Jagmagia, Rupali Suresh Vaidya and Abbas Raza Khan. The show began streaming on Amazon Prime Video October 23. The show also features Shweta Tripathi, Rasika Dugal and Kulbhushan Kharbanda (who have reprised their roles in the second season), Anjum Sharma and Amit Sialare. The makers recently announced a third season of the show.

Mirzapur 2 opened to mixed reviews from critics. Film critic Saibal Chatterjee, in his review for NDTV, gave the series a 2.5 star rating and he wrote: "Mirzapur 2 isn't a washout. Directed by Gurmmeet Singh and Mihir Desai, the show is well-crafted and the script by Puneet Krishna and Vineet Krishna, while relying largely on trite tropes, isn't without its share of highs. "