Bandish Bandits Review: What do you say about Naseeruddin Shah? No superlative can describe the rigour he brings to bear upon his performance. 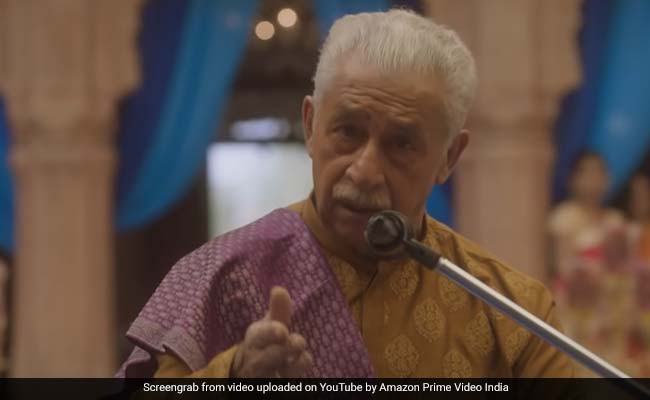 Every major character in Bandish Bandits, Amazon Prime Video's new show, is out to save someone or something. Barring a stern gharana guardian and a wannabe pop diva, everyone else is driven by a commendably altruistic spirit. A priceless musical legacy, a beautiful ancestral haveli, a budding romance between an unlikely pair, a singer's newfangled career and a conservative Rajasthani family are all under threat from forces within and without. This adds up to one hell of a burden for a 10-episode series to carry without the occasional ungainly misstep.

Bandish Bandits often tends to wilt under its own weight. But wait, it isn't a washout. The actors, led by Naseeruddin Shah, lend emotional authenticity to the show and the musical score by Shankar-Ehsaan-Loy, which faultlessly fuses rousing Indian classical with peppy electronic rhythms, is worth its weight in gold. Besides the redoubtable Shah, a solid-as-ever Atul Kulkarni, a magnificently steady Sheeba Chaddha and an aptly self-effacing Rajesh Tailang, among others, are at hand to give the show a leg up when it flags.

The songs, rendered by an array of classical vocalists and playback singers ranging from Pandit Ajoy Chakraborty (his Garaj garaj is absolutely sublime), Mame Khan (who joins Shankar Mahadevan on the fabulous theme number) and Dhananjay Mhaskar to Javed Ali, Shivam Mahadevan and Jonita Gandhi, effortlessly hit the right notes. The script is, however, not quite as sound.

Bandish Bandits is a rare treat - a web series woven around Indian classical music. It unfailingly conveys the beauty and power of the ragas even when they are blended with pop-oriented arrangements. What the creators needed alongside the music and the acting was a story focussed firmly on the conflict between two musical schools represented by a pair of youngsters from either side of the cultural divide who fall in love and form a team called Bandish Bandits. Parts of the series do concentrate on that particular track but not with the consistency that would have helped it retain its dramatic intensity.

Talking of divides, generational attitudes and artistic beliefs find themselves at odds in Bandish Bandits when Radhe Singh Rathod (Ritwik Bhowmik) strays into a pop concert by Mumbai singer Tamanna Sharma (Shreya Choudhry) and is instantly struck by the internet star's energy and confidence. East is East and West is West but the twain does meet. The union generates passion even as it causes a great deal of strain and heartburn, pulling into its vortex the future of the Rathod family and the girl's uneasy relationship with her estranged mother (Meghna Malik).

Radhe, against his better judgment and after initial hiccups, decides to collaborate with the Mumbai-bred Tamanna, who is looking for her first legit hit. The latter is constantly pilloried by her pushy and voluble music agent, Arghya (Kunaal Roy Kapur), to come up with an inspired composition. It is a struggle for her until Radhe lends his prodigiously good voice to the girl with a million YouTube views.

The boy has to conceal his identity from the world when he performs with Tamanna because his guru and grandfather, Pandit Radhemohan Rathod (Naseeruddin Shah), is a fierce purist opposed to music being commercialized, and the 21-year-old boy does not want to lose the opportunity to be the torchbearer of his family's musical tradition. The legacy means more to him than instant popularity.

The self-taught Tamanna has a career to build and protect, Radhe has a tradition to carry forward, and the Rathod patriarch, who has held the title of Jodhpur's sangeet samrat for two and a half decades, has to stand by all that he holds dear. It isn't only his music that is up for grabs. A bank manager has his sights on the old man's mansion because Panditji's son and Radhe's father Rajendra (Rajesh Tailang) has defaulted on a loan that he took to set up a music school.

Devendra (Amit Mistry), Panditji's younger unmarried son, steps up with a plan to save the haveli while Rajendra's wife Mohini (Sheeba Chaddha), who is a silent spectator as things drift, turns out to be only one who has it in her to prevent the family from disintegrating. The hint of a story of a woman suppressed and now coming into her own raises hopes of an important twist in the tale, but it is quickly jettisoned so that the men, including Panditji's principal rival, Digvijay (Atul Kulkarni) of the Bikaner gharana, can return centrestage and take the battle to each other.

The lovebirds and musical partners, on their part, face numerous obstacles as they struggle to find common ground between the two opposing worlds that they come from. After a point, their clash stops making sense. The music, however, never loses its force. Radhe and Tamanna have to contend with the emergence of a momentary triangle - Sandhya (Tridha Choudhury), a girl with royal links returns from Belgium and her father seals a deal with his friend Rajendra for Radhe's hand in marriage. Sandhya has a past and it catches up with her quickly enough.

Created by director Anand Tiwari and Amritpal Singh Bindra, Bandish Bandits is a love story, family drama and tradition-meets-modernity musical rolled into one. The visuals that Jodhpur yields - DOP Sriram Ganapathy does not go wrong - are sumptuous. They create a canvas that is markedly different from what OTT shows steeped in small-town milieus or gangland dimness usually produce.

Ignore the overstuffed plot and the show's tendency to rely at times on false emotional sleights and you might find a great deal to savour. When it scales the high notes and lingers there, Bandish Bandits assumes hypnotic proportions. The two leads, Shreya Choudhry and Ritwik Bhowmik, do a fair job of conveying the range of emotions sparked by the twosome's quickly changing fortunes. The way they hold their own alongside the stalwarts in the cast is noteworthy.

What do you say about Naseeruddin Shah? No superlative can describe the rigour he brings to bear upon his performance. Atul Kulkarni, too, is just as marvellous. Rajesh Tailang as the feckless son of a maestro who suffers in the shadows of a giant, is a picture of poise.

Perhaps the most difficult role in Bandish Bandits is played by Sheeba Chaddha. For the most part, she has to convey the character's innermost feeling with the subtlest of gestures and expressions. There isn't a single false note in her interpretation of a woman blessed with a voice of her own.

Amit Mistry makes an impact without seeming to stretch himself. Rahul Kumar, playing the hero's chirpy best friend, delivers an applause worthy performance. Tridha Choudhury has a limited role but does just enough in the time she has to leave you asking for more.

Watch Bandish Bandits for the music and the actors: they soar even when the show doesn't.