Breathe: Into The Shadows Review - Abhishek Bachchan's Show Is Low On Oxygen

Breathe: Into The Shadows Review - It is livened up occasionally by actors Saiyami Kher, Shradha Kaul, Shruti Bapna and Resham Shrivardhankar. 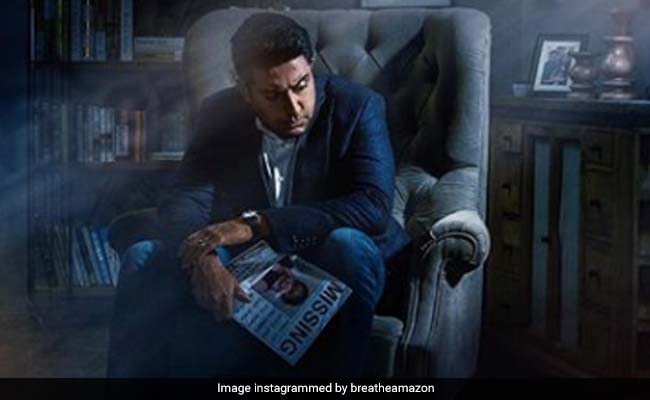 Breathe: Into The Shadows Review: Abhishek Bachchan on a poster (courtesy breatheamazon)

Several episodes into Breathe: Into The Shadows, an Amazon Original, the guilt-ridden male protagonist, a New Delhi psychiatrist who commits heinous acts under duress, wonders what his wife will see him as after the ordeal is over and normalcy is restored in their lives. She replies: "A man who did all he could to save his family." Whoa!

We, too, have a question. What does one do with a marathon psychological thriller (it is all of nine hours long) that is dead from the neck up? Breathe: Into The Shadows, starring Abhishek Bachchan as Dr. Avinash Sabharwal whose six-year-old daughter is kidnapped and Nithya Menen (in her first foray into the digital space) as his wife, Abha, has little breathing space for logic.

Brutal murders rock the city. The psychiatrist and his spouse, a five-star hotel chef, have dark secrets that the audience is privy to from the very outset. But the Delhi Police crime branch is left groping for answers as intra-department politics takes a toll on the investigations. A whole lot of mythology and psycho-babble is thrown into the mix for good measure. That is Breathe: Into The Shadows for you. Utter bilge.

The show lumps a bunch of daft ideas together to create a skiddy jumble of kills and spills that produces no genuine thrills. The bizarre yarn swings wildly from the utterly pea-brained to the outright preposterous, adding up to a 12-episode web series that takes one's breath away with its string of unmitigated irrationalities.

Anything that one reveals about the show beyond the basic plotline would constitute a spoiler. This review will, therefore, limit itself only to the broader narrative elements (for what they are worth) although the temptation to throw light on the crater-sized holes that the story is littered with is immense.

Breathe: Into The Shadows, projected as Season 1 of a new series rather than as a follow-up to 2018's R. Madhavan-starrer Breathe, in which a Mumbai-based football coach does everything he can to save his son, is helmed by the same director, Mayank Sharma. The central premise here is just as morally dodgy as the one in the previous outing - it justifies premeditated murder as a badge of parental responsibility. But this time around, all-round silliness creeps into the concoction, heightening the repulsion. Breathe: Into The Shadows Review: Abhishek Bachchan in a still

One would have to be exceedingly generous or extraordinarily gullible to let the risible rationalizations foisted upon the audience pass without a squeak of disbelief, if not disdain. That favoured whipping boy of all our filmed good-versus-evil sagas, Ravana, is inevitably invoked. The kidnapper, instead of making a demand for ransom after he has whisked Siya Sabharwal (Ivana Kaur) away along with an older girl (Resham Shrivardhankar), arm-twists the parents to support a weird plan.

The Sabharwal couple is enlisted to liberate the world from the weaknesses that Ravana's ten heads signify - kroadh (anger), vaasna (lust), bhay (fear) and so on. If that does not sound ludicrous, nothing ever will.

The shrink, a man that the Delhi Police often turns to for help when faced with particularly twisted sociopaths, hears his wife utter the phrase "mind games". He pounces on it. He says: "I am a psychiatrist. Who can play better mind games than me?" But when he does actually jump into the arena, the man isn't a pretty sight.

The wayward writing doesn't allow him to be one. "It's all become such a blur," Avinash says to his wife at one point. Had he been a better psychiatrist, he would have known that it did not 'become' a blur, it was always a blur. In a show of this nature, it is unfair to blame the actors for tying themselves up in knots. It is hilarious to hear Avinash and Abha discuss the sexual orientation of a lady they must kill to ensure that their daughter lives. 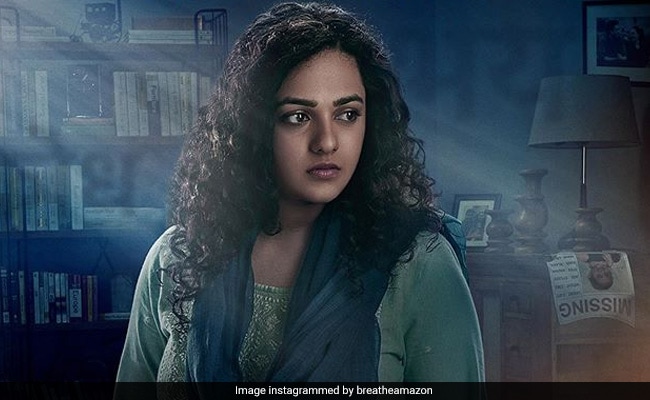 Breathe: Into The Shadows Review: Nithya Menen on a poster

Because the action has shifted from Mumbai to Delhi, only two of the characters from 2018's Breathe - Inspector Kabir Sawant (Amit Sadh) and Sub Inspector Prakash Kamble (Hrishikesh Joshi) - make a return. The duo is conveniently transferred to the national capital after the emotionally edgy Kabir has served a six-month jail term for causing grievous injury to Meghna (Plabita Borthakur) in an attempt to nab a notorious extortionist.

Meghna, a recovering drug addict, is in a wheelchair but has no regrets in life. She now shares her positive experiences at a de-addiction programme where Kabir finds her after landing in Delhi. Life for the policeman continues to be tough - he still hasn't gotten over the death of his daughter - not the least because of the mounting pressures at work as the Ravana murders send the media into a tizzy.

The kidnapper (who is played at different stages of his life by Dwij Vala, Varin Roopani and Ravish Dumra) also has a past. It is far more tortuous than anything that either the brooding Kabir or the chirpy Meghna has weathered. Indeed, the criminal's psychosis is rooted in a traumatic childhood - and a lullaby that he just cannot get out of his head. His targets, if not entirely blameless, aren't people deserving of the torment that is reserved for them. Breathe: Into The Shadows Review: Amit Sadh on a poster

Breathe: Into The Shadows is livened up occasionally by actors who lend some character to the narrative. Among them are Saiyami Kher as a hooker saving money for her younger brother's admission in an American art school, Shradha Kaul as an ambitious police officer, Shruti Bapna as a gay artist and writer, Shataf Figar in the role of a psychoanalyst and Resham Shrivardhankar as the student of medicine who is kidnapped in the opening moments of the series. None of them is allowed the scope to leave their stamp on a show that struggles to lift itself out of its morass.

If there stray moments in Breathe: Into The Shadows that can be deemed passable, much of the credit should go to Amit Sadh. Abhishek Bachchan and Nithya Menen are consistent in the emotional passages but that is not necessarily a good thing. Evenness prevents the despair and distress of the harried parents to come through. The couple is supposed to be in a race against time to save their daughter but the script is unable to create the tautness and sense of urgency that would have us believe that the storm raging within them is worth being invested in.

Breathe: Into the Shadows is low on oxygen. It disappears not into the shadows but into a one-way abyss.