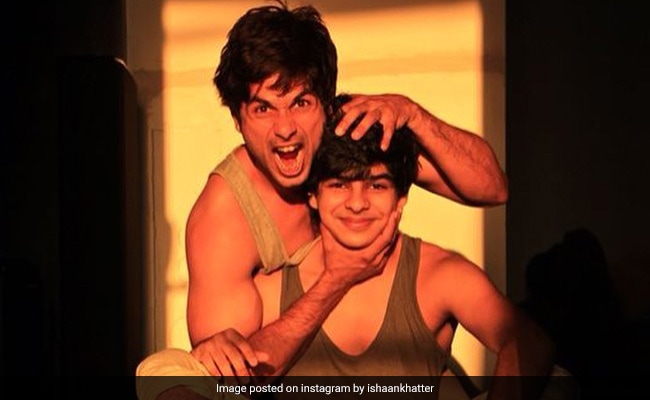 Shahid Kapoor turned 39-years-old on Tuesday, but the actor is still a kid at heart and Ishaan Khatter's birthday wish reminds us of just that. Ishaan shared a set of goofy albeit super cute set of pictures of the birthday boy. In one of the pictures, Shahid, sporting a man bun can be seen happily smiling for the camera, while in another picture, the actor's swag is off the charts. The third picture happens to be a throwback photograph which features the brother duo and it is simply adorable. Ishaan captioned the post: "OG Mere bade miyan. Happy birthday, Bhaijaan."

Ishaan Khatter and Shahid Kapoor frequently make appearances on each other's Instagram profiles and we just love it when that happens. Here are some pictures of Ishaan and Shahid together. Check them out, you can thank us later.

On the work front, Shahid Kapoor will next be seen in Jersey, a Hindi remake of the Telugu film of the same name. Gowtham Tinnanuri, who directed the original movie, is also helming the Hindi version. Shahid Kapoor plays the role of a former cricketer, who wants to make a comeback in the sports scenario by joining the Indian cricket team. Jersey is scheduled to hit screens in August. The actor was last seen in Kabir Singh, co-starring Kiara Advani.

Ishaan Khatter, who stepped into the film industry with Beyond The Clouds, starred in the 2018 film Dhadak, opposite Janhvi Kapoor. The actor will next be seen in Mira Nair's A Suitable Boy and Khali Peeli, alongside Ananya Panday.