"That person is Tabu, it really does half the job for you," said Ishaan Khatter 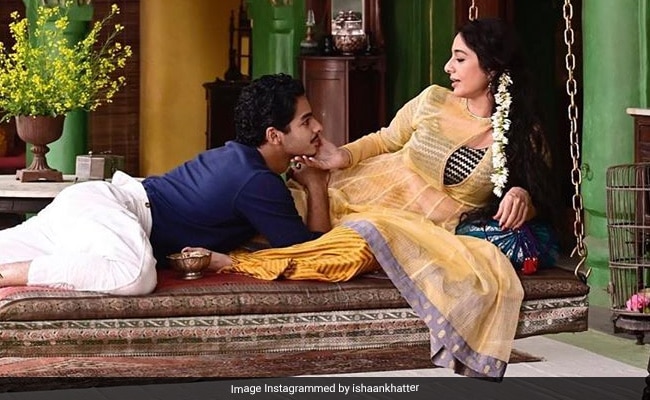 Ishaan Khatter and Tabu in A Suitable Boy. (courtesy ishaankhatter)

Ishaan Khatter, who will be seen playing Maan Kapoor, who is infatuated with a courtesan named Saeeda Bai (played by Tabu) in Mira Nair's A Suitable Boy, says that was "easy" for him to romance Tabu on screen. During an episode of Neha Dhupia's talk show No Filter Neha, Ishaan was asked if it was easy romancing the veteran actress on screen, to which he replied by saying, "Because that person is Tabu, it really does half the job for you. The 24-year-old actor added, "I have said this before and I have said this in Dhadak as well, it is always easy for me to play the besotted lover. Because she's mesmerising, she is and especially in this character. I am really excited for people to see Saaeda Bai," news agency IANS stated.

The Beyond the Clouds actor added that he has a nickname for the AndhaDhun actress. "It is Tabasco. Tabasco for Tabassum. I came up with it. She's mirchi," said Ishaan. When asked what he would like to gift her, Ishaan said, "My heart! I would like to gift her. I think I am very much in possession of my heart. I would gift her a book of Ghalib's poetry," IANS quoted Ishaan as saying.

The series will be shot across a variety of locations in India, including Lucknow and Maheshwar. The series also features accomplished actors like Randeep Hooda, Shefali Shah, Rasika Dugal, Namit Das, Gagan Dev Riar, Danesh Razvi, Mikhail Sen, Mahira Kakkar, Vijay Varma and Vijay Raaz. Tanya Maniktala will play Lata in the series. The web-series will be distributed by BBC Studios.

A Suitable Boy is based on Vikram Seth's novel of the same name. It showcases the stories of four families, set in post-independence era. The story is centered around Rupa Mehra, who, during the process of finding a suitable boy for her 19-year-old daughter Lata, embarks on a journey of self-discovery.

Coming back to Ishaan Khatter, the actor was last seen in the 2018 film Dhadak, co-starring Janhvi Kapoor. The actor will next be seen in Khaali Peeli, co-starring Ananya Panday.