A Suitable Boy: Tabu Shares Pics From Her 'New Beginnings' With Ishaan Khatter, Mira Nair And Others

In A Suitable Boy, Tabu will be seen playing the role of courtesan Saeeda Bai 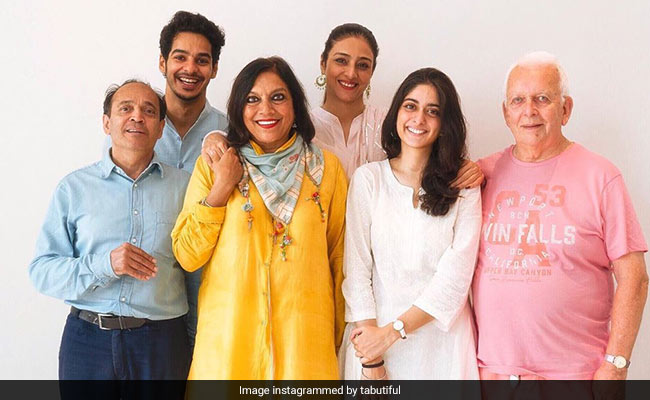 Tabu, who will soon be seen in Mira Nair's A Suitable Boy, shared pictures of herself along with the team on her Instagram profile, on Wednesday. The 47-year-old actress can be seen smiling with all her heart as she posed with her co-stars Ishaan Khatter, Tanya Maniktala and her director Mira Nair. The picture also features novelist Vikram Seth, who is the author of the A Suitable Boy and writer Andrew Davies. Tabu captioned the post: "New beginnings." She also shared another picture along with Ishaan Khatter and Tanya Maniktala, in which the trio can be seen dressed in pasted coloured outfits.

Tabu, who has earlier worked with Mira Nair in The Namesake, in an interview with news agency IANS, earlier this year said that she is looking forward to another "creatively charged experience" with the filmmaker. "I'm very happy to be working on A Suitable Boy and especially with Mira. Having worked with her on The Namesake, I look forward to one more creatively charged experience," IANS quoted Tabu as saying.

Last month, Tabu announced her association with the project by sharing a picture of the film's script and along with a throwback picture along with the film's director and she wrote: "Back together again with Mira Nair forA Suitable Boy. Happy and proud."

Back together again with #MiraNair for #ASuitableBoy With @bbcone Happy and Proud!