On 20th Wedding Anniversary, Kajol Reveals She And Ajay Devgn Are Meant To 'Live Happily Ever After In Pyjamas'

Kajol and Ajay Devgn's Anniversary: Kajol and ajay Devgn will be next seen on the big screen in Tanaji: The Unsung Hero 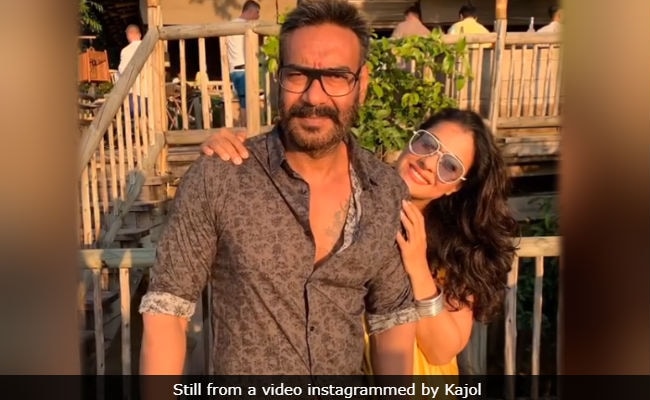 Kajol and Ajay Devgn's Anniversary: A picture from their vacation. (Image courtesy: Instagram)

Kajol and Ajay Devgn, now married for 20 years, are a match made in heaven, as per the actress' latest Instagram post, in which she describes how they are on the same page when it comes to celebrating their wedding anniversary. Kajol shared their conversation snippet with a cute boomerang video, which was made during their last trip to Thailand. Kajol's ended the post by alluding to the fairy tale with a happy ending and wrote: "And they lived happily ever after in pyjamas." Kajol and Ajay Devgn have co-starred in films like Ishq, Pyaar Toh Hona Hi Tha and Dil Kya Kare, married as per Maharashtrian tradition in 1996. They are parents to daughter Nysa, who is currently studying in Singapore, and son Yug, who stays with his parents in Mumbai.

Me: So what do you want to do today Ajay: I don't know what do u want to do Me: what do u feel like Ajay: Let's just stay in and order some good food Me : Perfect ! And they lived happily ever after in pajamas ...

Meanwhile, in an interview with HT Brunch, Ajay Devgn said that he and Kajol are perfect for each other. Speaking about how they fell in love, ajay Devgn said: "Actually we both don't know what it was.... We began talking, then we became friends and eventually we decided to get married. We didn't even propose to each other. It just happened naturally."

Ajay Devgn's latest film Total Dhamaal is performing quite well at the box office. His upcoming films are Tanaji: The Unsung Warrior, in which Kajol also plays a pivotal role. Kajol was last seen in Helicopter Eela, which underperformed at the ticket window. Ajay Devgn, who produced Helicopter Eela, told HT: "I don't really know what went wrong, but clearly something about it didn't work, and I just can't put my finger on it. Some liked the film, but some found it outdated."