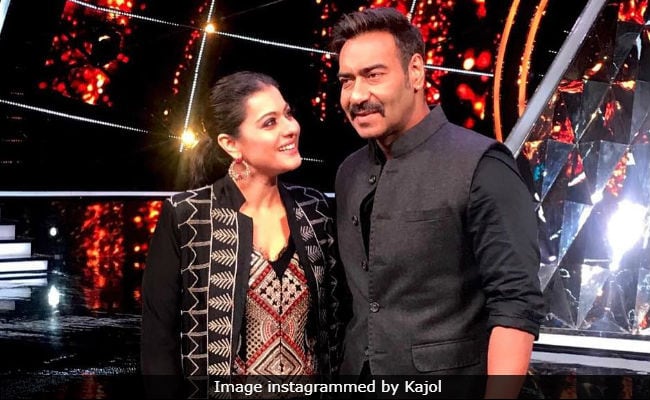 Kajol and Ajay Devgn on the sets of a TV show. (Image courtesy: Instagram)

Kajol's role in Ajay Devgn's work-in-progress film Taanaji: The Unsung Warrior was the team's best kept secret till now. However, as per latest intel she plays Ajay Devgn's onscreen wife in the film. As per a Mumbai Mirror report, the actress recently filmed a song sequence for Tanaaji on a lavish set, complete with elaborate rangoli and diyas, constructed in Mumbai's Film City. A source said: "The song was shot over a week in the last week of December and it is a part of the climax. It sees Kajol dressed in a traditional Maharashtrian outfit from the 17th century inside her onscreen home. Although, Ajay won't feature in the number there are glimpses of their past moments together."

"It has her thinking about her relationship with her warrior husband and a certain situation the couple is faced with at that time. The dance number accentuates her character's emotional state and focusses on her facial expressions," the source added.

Taanaji: The Unsung Warrior is based on the life of Maratha warrior Tanaaji Malusare, who fought several battles alongside Chhatrapati Shivaji. However, he is best known for his ingenious role in the Battle of Sinhagad, in which he invaded Kondhana fort by using monitor lizards.

Taanaji: The Unsung Warrior is directed by Om Raut, who earlier shared some stills from the film. Om Raut debuted as a director with Marathi film Lokmanya: Ek Yug Purush while Tanaaji will be his Bollywood debut project.

Taanaji: The Unsung Warrior is expected to open in theatres this year.