Koffee With Karan 6: Ajay Devgn Trolls Kajol. Not Once, Not Twice, But... You'll See

Ajay Devgn got the sternest stare from wife Kajol when he said "I love my wife" is the "lie that every actor from the film fraternity tells." 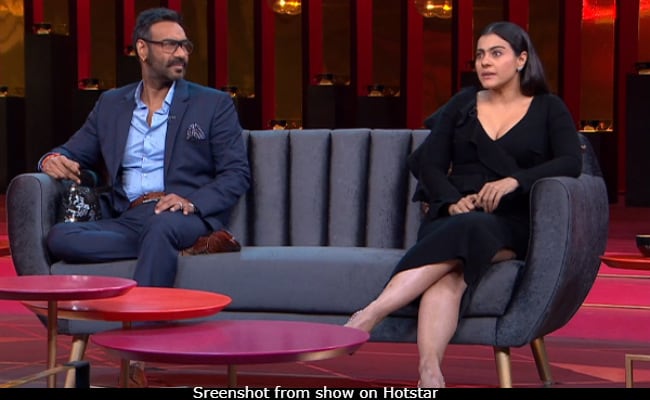 Are you looking forward to the next episode of Koffee With Karan 6 already? Because we are. Kajol and Ajay Devgn are Karan Johar's guests for the next episode, hilarious promos of which have been shared on social media. In the promos, Kajol can be seen being trolled by Ajay Devgn but all in good humour, of course. One of the Koffee With Karan promos, featuring Kajol and Ajay Devgn, starts with Ajay talking about how fussy the 44-year-old actress is when it comes to posting pictures on social media. "Problem is not clicking the pictures. Problem is... three hours they are sitting and correcting them so they can post it. She's never done this in her life, buddhape pe aake, I don't know why," said Ajay, 49.

Kajol, who couldn't believe what she was hearing, protested and said: "Tumhara buddhapa hoga... mera toh nahi hai!" In another video, when Ajay was asked to name an actor from the current generation who would look best opposite Kajol on screen, he jokingly asked: "As a son?"

On the show, Karan Johar also asked Ajay Devgn: "She (Kajol) talks and you listen?"

"No, she talks and I don't listen," Ajay replied promptly. This time, even Kajol burst out laughing.

Ajay Devgn got the sternest stare from wife Kajol when he said "I love my wife" is the "lie that every actor from the film fraternity tells." Looking at Kajol, he clarified: "I'm talking about others!"

In the promos, Karan Johar also asked Ajay: "Can I make an effort with you and can we become friends?" However, it was Kajol who responded and said: "I don't want you to become his friend, you are my friend!"

In 2016, Karan Johar and Kajol featured in headlines after they parted ways. Things took an ugly turn when Karan Johar's Ae Dil Hai Mushkil had a box office collision with Ajay Devgn's Shivaay. Ajay claimed that Karan was paying for positive reviews of his film. Kajol had supported Ajay at that time. Karan wrote about the clash in his autobiography titled An Unsuitable Boy and said: "The problem was actually never between her and me. It was between her husband and me. I felt that she's not going to acknowledge 25 years of friendship, if she wants to support her husband, then that's her prerogative."

Karan and Kajol's broken friendship was mended when the actress congratulated the filmmaker after the birth of his twins Roohi and Yash. Kajol has starred in many of Karan Johar's movies starting from Kuch Kuch Hota Hai (his first film as a director) to 2010's My Name Is Khan.

How excited are you about the next episode of Koffee With Karan 6? Tell us in the comments below.