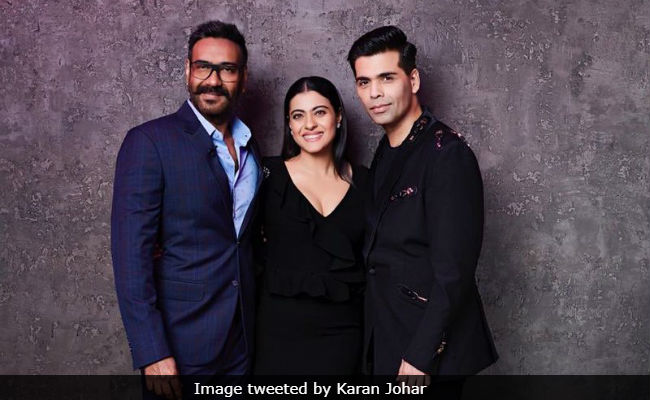 Kajol, Karan Johar and Ajay Devgn on the sets of Koffee With Karan 6. (Image courtesy: Twitter)

One would expect a big bang after putting Kajol and Ajay Devgn together on Karan Johar's Koffee couch, but the actress says, "All is well" with a mischievous wink emoticon. The caption could also indicate that 'all is well' between Karan Johar and Ajay Devgn, who featured in headlines after their much-publicised falling out during the promotions of their films Ae Dil Hai Mushkil and Shivaay, respectively, in 2016 (more about that later). The fight also soured Kajol and KJo's relationship, who mended their bond several months later after she called up to congratulate her Kuch Kuch Hota Hai director after the birth of his twins. Kajol posted a BTS video from the sets of Koffee With Karan 6 after filming the episode with her actor husband. The couple and the host looked happy and boy, we cannot wait for this episode to air.

Kajol also shared two pictures from the sets of the show on Instagram story: In 2016, Ajay Devgn's Shivaay battled Karan Johar's Ae Dil Hai Mushkil at the box office and things got worse after Ajay alleged Karan was paying for good reviews of his film. Kajol had supported Ajay at that time. KJo also wrote about the clash and the impact it had on their relationship in his autobiography, titled An Unsuitable Boy. "The problem was actually never between her and me. It was between her husband and me. I felt that she's not going to acknowledge 25 years of friendship, if she wants to support her husband, then that's her prerogative," he wrote.

We hope to see some hilarious and emotional moments in this episode of Koffee With Karan 6.