On Amitabh Bachchan And Jaya Bachchan's 45th Anniversary, A Post From Son Abhishek To Make You Smile 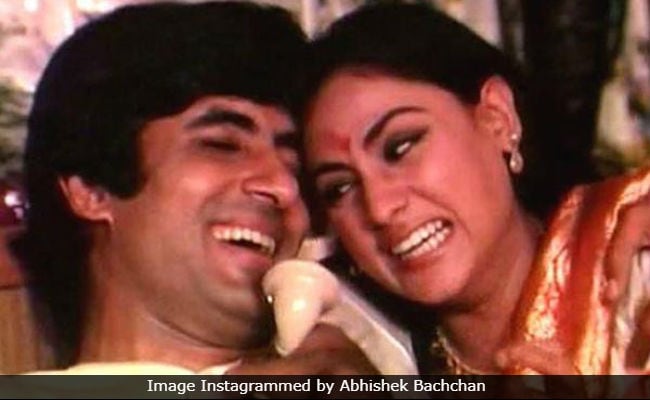 Amitabh Bachchan and Jaya Bachchan in a still from Abhimaan. (Image courtesy: Instagram)

New Delhi: Abhishek Bachchan has the sweetest message for his parents Amitabh Bachchan and Jaya Bachchan on their 45th wedding anniversary. Abhishek shared a million dollar throwback picture of the couple on social media and wrote: "I wish that both of you continue to laugh and love for the next 45 years too. Happy 45th anniversary Ma and Pa. I love you." The picture shared by Abhishek is a still from the 1973 hit film Abhimaan, one of their first films after marriage. The post has received over 75,000 likes on Instagram, within a few hours. Fans instantly started wishing the couple. "Happy anniversary to the most dignified couple on and off screen," read one comment. Another comment read "They make such a cute couple, giving couple goals to us all" and we couldn't have agreed more.

I wish that both of you continue to laugh and love for the next 45 years too. Happy 45th anniversary Ma and Pa. I love you.

Amitabh Bachchan married actress Jaya Bachchan in June 1973 and they have featured together in films such as Sholay, Kabhie Khushi Kabhie Gham... and Silsila among others. The couple is also seen endorsing a jewellery brand together.

On the occasion of his 45th anniversary, Big B shared a throwback picture on social media and thanked his fans for their warm wishes. Mr Bachchan also revealed in his blog that he won't be able to celebrate the anniversary with Jaya Bachchan as she will be travelling. "It is about to chime the bell for midnight , the 3rd of June ...time to call the wife who travels and to wish her for the years together," read an excerpt from his blog.

T 2825 - They that give love and send greetings on our 45th marriage anniversary .. my gratitude and love ..

Amitabh Bachchan is currently filming Thugs Of Hindostan co-starring Aamir Khan, Katrina Kaif and Fatima Sana Shaikh. He will also be seen in Bhamastra with Ranbir Kapoor and Alia Bhatt.