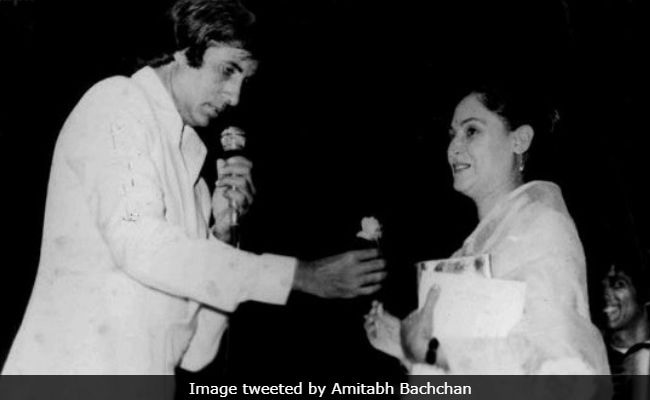 New Delhi: It's Amitabh Bachchan and Jaya Bachchan's 45th wedding anniversary today and the 75-year-old actor said that he won't be able to spend the day with his wife as she's travelling. The purpose of Jaya Bachchan's travel is unknown. "It is about to chime the bell for midnight, the 3rd of June... time to call the wife who travels and to wish her for the years together... Tomorrow shall be another day... normal for most special for some," Mr Bachchan wrote on his blog on the eve of his anniversary. On Twitter, the actor shared a throwback photo of himself with Jaya Bachchan and thanked his fans and well-wishers. "They that give love and send greetings on our 45th marriage anniversary... my gratitude and love," he tweeted.

T 2825 - They that give love and send greetings on our 45th marriage anniversary .. my gratitude and love .. .pic.twitter.com/vPoCtwNqSz

Their son Abhishek also wished them on Instagram with a still from their film Abhiman:

I wish that both of you continue to laugh and love for the next 45 years too. Happy 45th anniversary Ma and Pa. I love you.

Amitabh Bachchan and Jaya Bachchan (then Jaya Bhaduri) met on the sets of Guddi (1971) and went on to star in films such as Ek Nazar and Bansi Birju among others. They got married in June 1973, roughly a month after the release of their film Zanjeer, which gave AmitabH Bachchan the tag of 'angry young man.' After getting married, they co-starred in films like Abhimaan (1973), Chupke Chupke (1975), Mili (1975) and Silsila (1981) to name a few.

Promoted
Listen to the latest songs, only on JioSaavn.com
After the birth of their children Shweta and Abhishek, Jaya Bachchan tool a sabbatical of sorts and appeared in few films. In the 2000s they co-starred in films like Kabhi Khushi Kabhie Gham, Kabhi Alvida Naa Kehna and Ki And Ka (special appearance).

Amitabh Bachchan's upcoming films are Thugs Of Hindostan and Brahmastra