Brahmastra: Amitabh Bachchan Gets Ranbir Kapoor's Name Wrong In Caption For Selfies With Alia Bhatt, Then Posts This Disclaimer

"You can edit and change the name Ranveer to Ranbir," Amitabh Bachchan was told 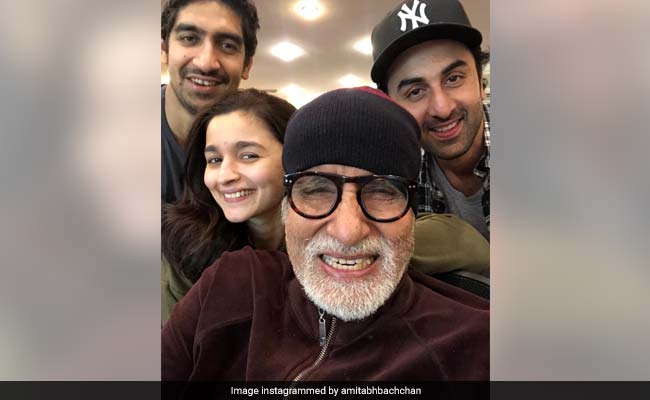 New Delhi: Team Brahmastrahad a script reading session on Friday, which means Alia Bhatt, Ranbir Kapoor and director Ayan Mukerji met Amitabh Bachchan. We got glimpses of how much fun it was catching up with the 75-year-old actor on Big B's Instagram - he uploaded selfies from Friday evening with hilarious captions but, the megastar appeared to have made a typo while naming Ranbir Kapoor. For the first selfie which Big B uploaded on Friday night, he wrote: "We prep for Brahmastra... Ranveer, Alia, Ayan... everyone else except me... I prep to brush my teeth." But Big B had his Instafam at his disposal, who quickly asked him to make the correction from Ranveer to Ranbir and said: "You can edit and change the name Ranveer to Ranbir." Another user commented: "It's Ranbir not Ranveer, please."

Big B followed the selfie with two more, in one of which, he posted a disclaimer and rectified the "typo": "Typo .. that's Ranbir not Ranveer," he captioned it. For the third selfie, this is how Big B captioned it: "We prep for Brahmastra... Ranbir, Alia, Ayan... all except moi.. I seem to having an outer space experience."

We prep for BRAHMASTRA .. Ranveer , Alia , Ayan .. every one else except me .. I prep to brush my teeth

We prep for BRAHMASTRA .. RANBIR , Alia , Ayan .. all except moi .. I seem to having an outer space experience ..

Meanwhile, this is what Big B had posted about Ranveer Singh (he got the spelling correct this time) earlier:

This is the ultimate limit of excess .. ready to compete with Ranveer SINGH ..

This is the first time that both Ayan Mukerji and Alia Bhatt are working with the "legend." Ranbir Kapoor, who is not on social media, had a cameo in Amitabh Bachchan's Bhoothnath Returns but this will be his first full-fledged role with Mr Bachchan. Both Ayan and Alia posted updates from the script reading session of Brahmastra. Sharing a photo from the meeting, Alia wrote: "Oh captain my captain! Prep with the legend" while Ayan uploaded one of the selfies produced above with this caption: "Selfie by the legend."

Brahmastra, which also stars Mouni Roy, is being made as a fantasy trilogy, the first part of which is expected to release next year. The first leg of the shooting schedule wrapped in March and the team are all set to move on to the next phase.
Comments
amitabh bachchanranveer ranbir