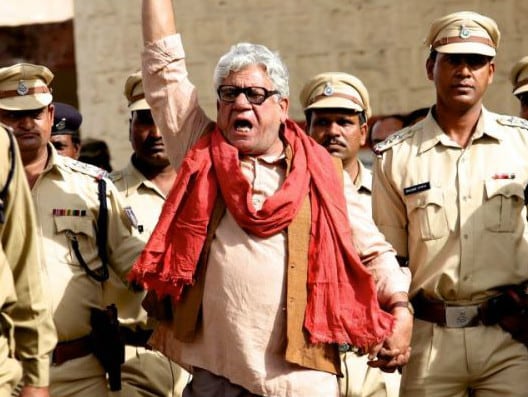 Om Puri starred as a political leader in Chakravyuh

New Delhi: Om Puri, an acting legend and star of films like Ardha Satya, Aaksrosh and Jaane Bhi Do Yaaron, died in Mumbai on Friday morning. Om Puri was 66 and died following a heart attack. Om Puri, who began his journey in the industry as a theatre personality, has ruled the cinematic arena with his stellar performances in films ranging from mainstream, art and crossover movies, including Hollywood, British and Pakistani films. Some of Om Puri's most celebrated films also include Satyajit Ray's Sadgati, 1993's In Custody, Maachis and his powerful cameo performance in Richard Attenborough's Gandhi. Om Puri is fondly admired for his impactful dialogues and natural onscreen demeanour.

As the late actor's colleagues remember him on Twitter, here's a look at the top ten dialogues of Om Puri.

Om Puri played the role of Hanif Qureshi, a disabled Muslim advocate, who fights a case for a poor shopkeeper in the courtroom drama. "Mazhab insaanon ke liye banta hai, mazhab ke liye insaan nahi bante," - "Religion has been made for humans and not vice versa."

The veteran actor played a headstrong cop - Udham Singh in Gupt. Udham Singh tracks down an absconding criminal, played by Bobby Deol in the 1997 crime drama.

Om Puri featured as sacked colonel Krishnakanth Puri, who was asked to quit after he failed at an important mission, in the 1998 film.

Om Puri brought alive the character of a corrupt property builder in the 1983 laugh-riot Jaane Bhi Do Yaaro, which received the status of a cult film over the years.

"Draupadi teri akele ki nahi hai ... hum sab shareholder hai" - "Draupadi is not just yours... we are all equal shareholders"

Om Puri was the life coach to Harshvardhan Kapoor's character in Mirzya. Om Puri appeared in a cameo performance and advises a love-lorn Mirzya to navigate through life.

Om Puri's role in the 2012 political drama is loosely based on Naxalite leader Kobad Ghandy. Directed by Prakash Jha, Om Puri co-starred with Arjun Rampal and Abhay Deol in the film.

"Main aise loktantra mein vishvas nahi karta, joh gareebon ki izzat karna nahi jaanta" - "I have no belief in a democracy which does not respect the poor"

Sunny Deol featured as the protagonist Narsimha but it was the lord of the goons Suraj Narayan Singh or Bapji, who had everyone's attention. Om Puri featured as a capitalist, who ruled over the city owing to his wealthy status.

Promoted
Listen to the latest songs, only on JioSaavn.com
Om Puri has made significant appearances in more recent Bollywood films like Singh Is Kinng, Hera Pheri and Malamaal Weekly. In the 'nineties, Om Puri shifted focus from Bollywood and art films to star in British projects like East Is East, (1999), My Son the Fanatic (1997) and 2001's The Parole Officer. His Hollywood films include The Ghost and the Darknessand Charlie Wilson's War, in which he co-starred with Julia Roberts and Tom Hanks. He also shared screen space with Helen Mirren in comedy drama The Hundred-Foot Journey. Om Puri voiced the character of Bagheera in the Hindi version of 2016's The Jungle Book.

Om Puri voiced the character of Bagheera in the Hindi version of 2016's The Jungle Book.