Nothing To See Here, Just A Pic Of Yash And Radhika Pandit With A "Totally Kissable Head In Between"

"She surprised us all by staying so calm throughout the process! I think I was freaking out the most!" wrote Radhika Pandit 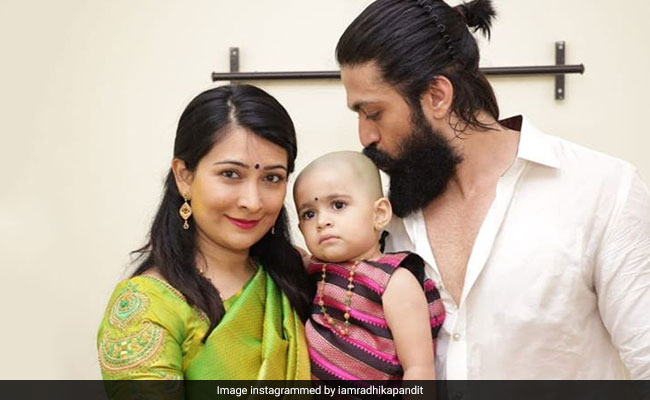 KGF: Chapter 1 star Yash and his actress wife Radhika Pandit occupied a spot on the list on trends on Thursday, courtesy their new pic with their little daughter Ayra. On Thursday, Radhika shared a photo of herself, Yash and Ayra and introduced us to her family like this: "Mr and Mrs Yash... With a totally kissable head in between." No points for guessing that she wrote "totally kissable head" for one-year-old Ayra, who recently got a summer special haircut (more on that later). The photo features Radhika holding Ayra in her arms with Yash kissing on her head. Adorable, isn't it? In her post, Radhika Pandit also revealed that she "freaked out the most" during Ayra's mundan whereas the little munchkin surprised all by staying calm. "P.S: She surprised us all by staying so calm throughout the process! I think I was freaking out the most!" added Radhika.

Mr and Mrs Yash.. with a totally kissable head in between P.S : She surprised us all by staying so calm throughout the process! I think I was freaking out the most!! #nimmaRP #radhikapandit

Yash and his little munchkin trended all day on social media on Wednesday after the actor shared a photo of her, in which she doesn't look happy about her new haircut. In the ROFL picture, Ayra could be seen staring at Yash with furrowed brows. Sharing the picture, Yash hilariously wrote: "Ayra: Dad, I know its summer... but I'm damn sure THIS is NOT summer cut! Dad: Well... ahem!"

Yash and Radhika Pandit got married in December 2016. They welcomed their first child Ayra in December 2018 and son in October last year. The couple have worked together in films such as Drama, Mr And Mrs Ramachari and Santhu Straight Forward.

On the work front, Yash has featured in several Kannada movies such as Moggina Manasu, Rocky, Kallara Santhe, Gokula, Thamassu, Modalasala, Kirataka, Lucky, Chandra and Mr. and Mrs. Ramachari among others. He is best-known for his performance in KGF: Chapter 1, directed by Prashanth Neel and produced by Vijay Kiragandur. The film's sequel - KGF: Chapter 2 - is scheduled to open in theatres in July this year.