In the father-daughter photo, Ayra can be seen staring at Yash with furrowed brows and TBH, she doesn't look too happy 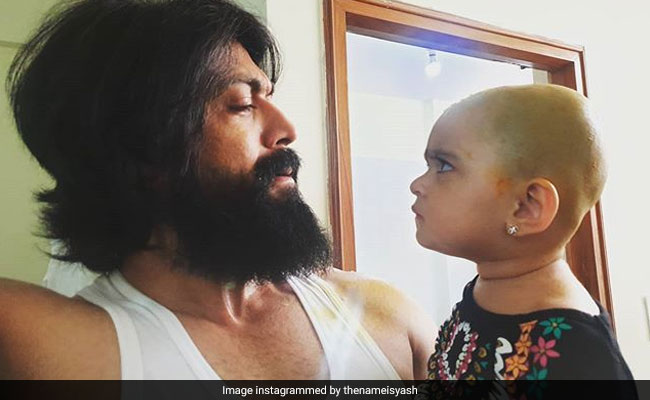 South actor Yash, star of KGF: Chapter 1, checked into Instagram with an adorable photo featuring his one-year-old daughter Ayra. In the caption, Yash shared a glimpse of a conversation that his baby daughter surely wanted to have with him on the day of her haircut. Yash's caption actually gives context to the ROFL photo shared by Yash. In the father-daughter photo, Ayra can be seen staring at Yash with furrowed brows and TBH, she doesn't look too happy about her summer special haircut. Here's how Yash captioned the photo: "Ayra: Dad, I know its summer... but I'm damn sure THIS is NOT summer cut! Dad: Well... ahem!" LOL.

Remember what happened when Ayra got her ear pierced?

Little Ayra often features in adorable posts on Yash's Instagram and our favourite is when she announced the arrival of her baby brother. Yash and his wife, actress Radhika Pandit married in 2016 and Ayra was born in December 2018. The star couple welcomed their second child, a son in October last year.

Ayra also helped Yash start the New Year in the "best" possible way: "Best way to start the year is to look at life like a child - with lil excitement, lil joy and lots of innocence."

Best way to start the year is to look at life like a child - with lil excitement, lil joy and lots of innocence. Wishing you all a Very Happy New Year! #TheNameIsYash #Happy2020

Wondering if my Dad will have more modakas than me Anyway.. wishing u all a very Happy Ganesha Habba from your putta Gowri @iamradhikapandit

Yash is best known for his starring role in the critically acclaimed KGF-Chapter 1. He is now busy with the second part of the film, which went on floors in March last year. Yash returns as the protagonist in the second part, only this time, he's pitched against Sanjay Dutt, who plays the antagonist. Raveena Tandon also recently roped in for the film.