Yash and Radhika Pandit, who are also parents to a daughter, shared a cuteness overloaded 'conversation' between Ayra and their new-born son 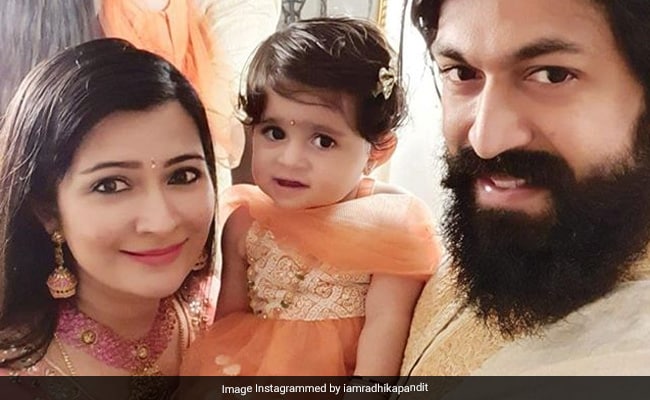 Yash and Radhika Pandit got married in 2016 (courtesy iamradhikapandit)

Kannada star Yash, best known for headlining the period piece KGF-Chapter 1, and his wife actress Radhika Pandit welcomed a baby boy on October 30. After trending for hours, the couple shared the baby news with an adorable Instagram post. Yash and Radhika Pandit, who are also parents to a daughter named Ayra, shared a cuteness overloaded 'conversation' between Ayra and their new-born son in baby jargon. Yash helped us decode their conversation in the Instagram post as he said this: "What she's trying to say is that she's got a new baby brother today. Her happiness is doubled, yaar. Can't wait for these baby conversations. Thank you for all your love and blessings. Will share more news shortly."

Radhika and Yash trended a great deal recently for a glimpses of their Diwali festivities with Ayra on Instagram. "It's our lil one's first deepavali... it couldn't get any more special," Yash captioned his post.

It's our lil one's first Deepavali.. it couldn't get anymore special. HAPPY DEEPAVALI from us to you all.. oh and Ayra had something special to say too.. u got it? Have a safe and blessed one

Earlier this year, Radhika Pandit and Yash had made the big reveal about the second pregnancy with an adorable video, featuring Ayra. Here's what the message from Yash and Radhika's daughter said: "Hi everyone, Ayra here, you guys won't believe what I just heard. They said my dad has speed, but this? Wait a min! Is it too early? Or too late to announce? But I am sure you guys will be happy! I am too, my parents are due for baby number two. Hold on....Does that mean I have to share my toys? That's ok... Swag se karenge uska swagat! - Ayra."

On the work front, Yash received critical acclaim for his film KGF-Chapter 1 and is now busy with the second part of the film, which went on floors in March this year. Yash returns as the protagonist in the second part, only this time, he's pitched against Sanjay Dutt, who plays the antagonist.