On Yash's Birthday, His Instagram Was 'Hacked With Love' By Radhika Pandit And Daughter Ayra 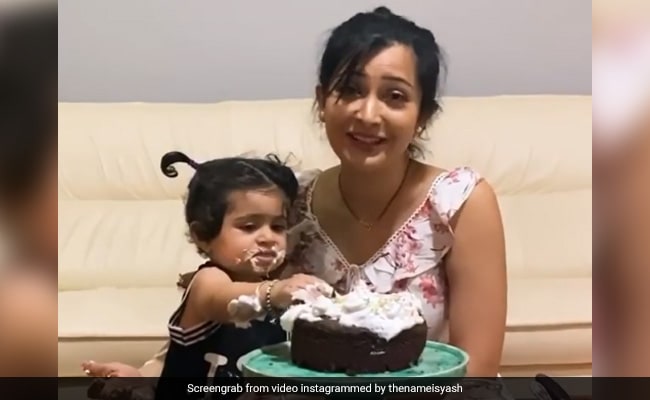 Radhika Pandit and Ayra in a still from the video. (courtesy thenameisyash)

KGF star Yash turned 34-years-old on Wednesday and in order to make the actor's birthday all the more special, his wife Radhika Pandit and daughter Ayra took over his Instagram profile and surprised him with a birthday wish that they posted from the actor's Instagram handle. In the video posted by Radhika, the mother-daughter duo can be seen preparing a birthday cake for Yash, which was devoured by Ayra by the end of the video (so cute). Radhika captioned the post: "Surprise! We've taken over your account like we've taken over your life. Happy birthday to the one and only rocking star, from your biggest fans." She added the hashtags #hackedwithlove and #ayradhika to the post.

In October last year, Radhika Pandit and Yash welcomed their second child - a baby boy. The couple met on the sets of TV show Nandagokuland and they have worked together in films such as Drama, Mr And Mrs Ramachari and Santhu Straight Forward. They stepped into the Kannada film industry with the 2008 film Moggina Manasu. Yash and Radhika got married in December 2016 and they welcomed their first child Ayra in December 2018.

Yash received critical acclaim for his film KGF-Chapter 1and is now busy with the second part of the film, which went on floors in March last year. Yash returns as the protagonist in the second part, only this time, he's pitched against Sanjay Dutt, who plays the antagonist.