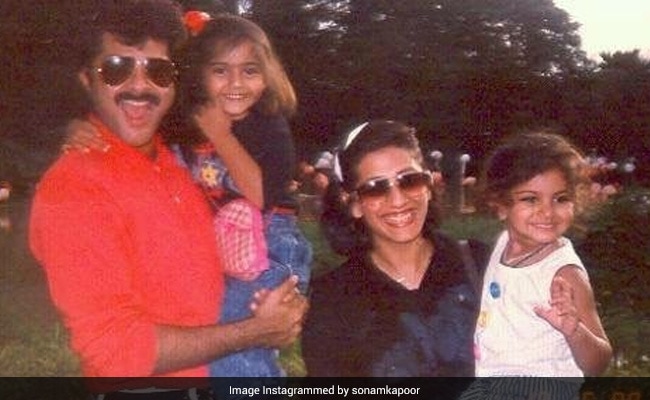 Actress Sonam Kapoor dropped a priceless gem from her childhood days on her Instagram handle on Wednesday. Sonam's latest post features herself with her dad Anil Kapoor, mom Sunita Kapoor and sister Rhea Kapoor. In the picture, Sonam and Rhea as cute munchkins can be seen posing with their parents in the garden. Anil is holding little Sonam in his arms on the left and Rhea is with her mom Sunita on the right. The Kapoor family is flashing their beautiful smiles in the frame. While it is a treat to see Sonam, Rhea and Sunita, Anil's excited look also deserves your attention.

Earlier, Sonam Kapoor posted a throwback picture of her parents Anil Kapoor and Sunita Kapoor on their wedding anniversary on Instagram. Wishing them a happy anniversary, Sonam wrote, "There's not a day that goes by where I'm not blown away by how in love you two still are. Thank you for teaching me that no matter what happens in life, love and family champions everything. 37 years of marriage and 11 years of dating (48 years), and a lifetime to go. How I wish I could've hugged you both in person right now. Happy anniversary, Maa & Daddy. Love you!"

Sonam Kapoor frequently treats her Instafam with her childhood pictures on the platform. See a few more posts of the actress here.

Anil Kapoor married Sunita Bhavnani, a costume designer in 1984. Sonam Kapoor, Rhea Kapoor and Harshvardhan Kapoor are their children. While Sonam and Harshvardhan are actors, Rhea is a producer.