"I lost my brother before going there and it did disturb me and my stunts," said Nikki Tamboli 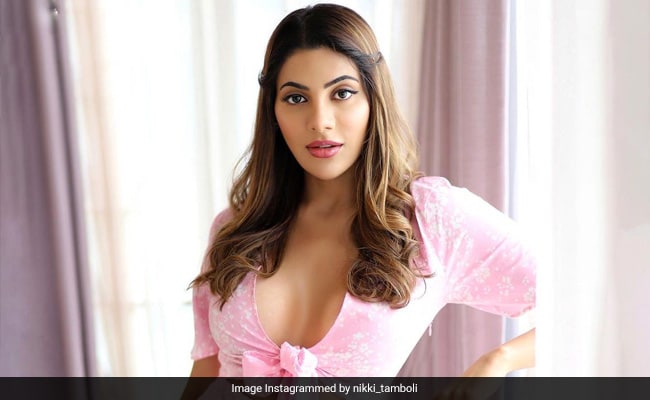 Nikki Tamboli, who is the first contestant to be evicted from the adventure reality show Khatron Ke Khiladi 11, in a recent interview with SpotboyE, talked about the factors that affected her during the show and how she felt after her exit. The actress, who lost her brother Jatin Tamboli due to covid-19, just before signing the show, told SpotboyE, "When I had signed the contract I felt that it will be one more super hit journey. I will once again entertain my fans and audience. But I lost my brother before going there and it did disturb me and my stunts. As I had to leave my family here and go. But I will not say that I was not fearful. I had a lot of fear in me in all the stunts. That incident had affected me so much that I didn't even try the stunts."

Speaking of her family's reaction to her early exit from the TV show hosted by filmmaker Rohit Shetty, Nikki Tamboli said that her parents were "disappointed" and so was she. "When I was sitting and watching my episodes with my family I could see that they are not very happy. The only thing that moment I felt as if I would have tried I may have gone a long way. I had trust in myself that I can overcome my fears and fight with my fears. But that didn't happen. And I am also disappointed in myself. I was not expecting this short journey. I don't know what happened to me suddenly I was going into panic mode and was not able to manipulate my mind," said Nikki Tamboli.

Nikki Tamboli  made her acting debut with Telugu film Chikati Gadilo Chithakotudo in 2019. She also appeared in Raghava Lawrence's film Kanchana 3. She became a household name after she participated in the TV reality show Bigg Boss 14 last year, which was hosted by Salman Khan. Nikki's friend and actress Rubina Dilaik won the show.

Eid Mubarak From Hina Khan. See Pics From Her Festivities