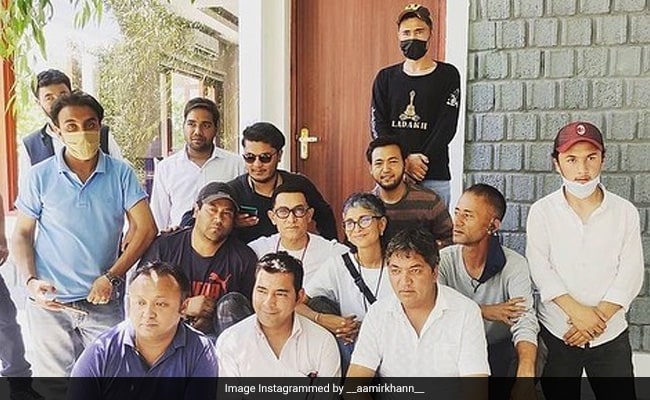 Aamir Khan and Kiran Rao, who announced separation earlier this month, have been working together on the film Laal Singh Chaddha, which is their joint production. They have been shooting for the project in Ladakh, where they were joined by son Azad and actor Naga Chaitanya, who co-stars with Aamir in the film. They recently held a press conference where they shared their experience of working in the region and posed for a picture at the press club there. Aamir Khan might be a social media recluse but many fan pages dedicated to him, shared the pictures on Instagram.

Aamir Khan and Kiran Rao, who are co-producing Laal Singh Chaddha, welcomed Naga Chaitanya onboard and shared pictures from the sets of the film. A post shared by the official Instagram account of the production house Aamir Khan Productions, read: "Welcome Bala, stealer of hearts, you have already stolen ours. Love, Kiran and Aamir."

Aamir Khan and filmmaker Kiran Rao, married for 15 years, announced separation in a statement earlier in July. The actor married Kiran Rao in 2005 and they welcomed their son Azad in 2011. Aamir Khan and Kiran Rao met on the sets of Lagaan, where Kiran was an assistant director. "Now we would like to begin a new chapter in our lives - no longer as husband and wife, but as co-parents and family for each other. We began a planned separation some time ago, and now feel comfortable to formalise this arrangement, of living separately yet sharing our lives the way an extended family does," read an excerpt from their statement.