They were also joined by Naga Chaitanya, who co-stars with Aamir in the film 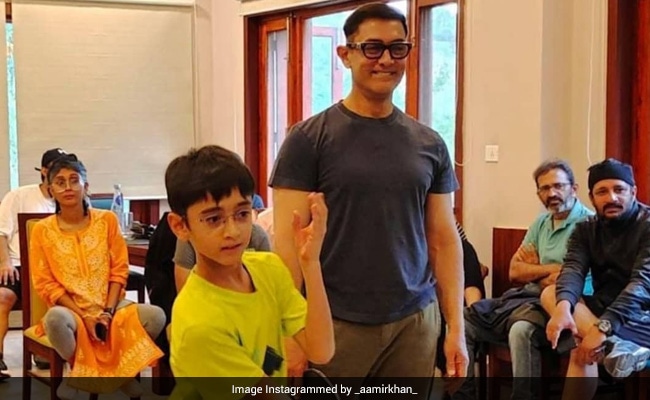 Aamir Khan and Kiran Rao, who announced separation earlier this month, had stated that they will "remain devoted parents" to son Azad and had also mentioned that they will be working together and seems like they are doing just that. Aamir Khan and Kiran Rao occupied a spot on the list of trends on Friday, after pictures of them playing table tennis with son Azad, from the sets of Laal Singh Chaddha went viral. The pictures also feature Aamir's co-star Naga Chaitanya and the crew of the film. Aamir Khan might be a social media recluse but several fan pages dedicated to the actor shared the pictures on Instagram.

Take a look at the viral pictures:

A few days ago, Aamir Khan and Kiran Rao, who are co-producing Laal Singh Chaddha, shared a picture from the sets on the official Instagram account of the production house Aamir Khan Productions and they welcomed Naga Chaitanya onboard with these words: "Welcome Bala, stealer of hearts, you have already stolen ours. Love, Kiran and Aamir."

Aamir Khan and Kiran Rao, married for 15 years, announced separation in a statement earlier in July. The actor married Kiran Rao in 2005 and they welcomed their son Azad in 2011. Aamir Khan and Kiran Rao met on the sets of Lagaan, where Kiran was an assistant director. "We remain devoted parents to our son Azad, who we will nurture and raise together. We will also continue to work as collaborators on films, Paani Foundation, and other projects that we feel passionate about. A big thank you to our families and friends for their constant support and understanding about this evolution in our relationship, and without whom we would not have been so secure in taking this leap," read an excerpt from their statement.

Sunny Leone's Maldives Vacation Is All About The Sun, Sea And Sand. See Pic