A day after Miraya was born, Esha Deol made the baby announcement with an adorable post on behalf of Radhya 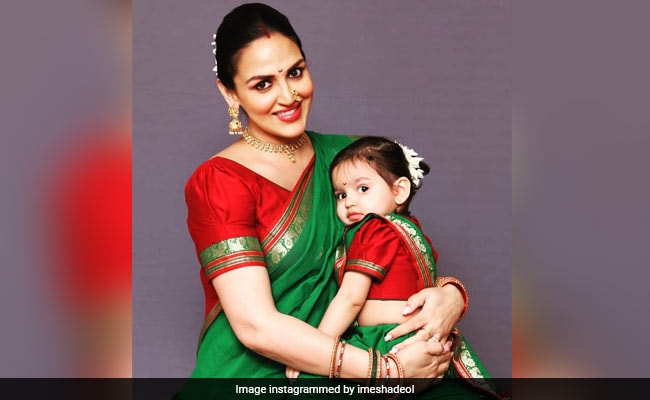 Actress Esha Deol, who is now a mother of two daughters Miraya and Radhya, opened up about what makes her daughters' names special in an interview with Mumbai Mirror. Speaking to the publication, the new mom said both the names - Miraya and Radhya - are related to Lord Krishna: "When Lord Krishna worships Radha, it's called Radhya, while Miraya means a devotee of Lord Krishna. Both girls have that in common and I love how Radhya and Miraya sound together." Esha Deol and Bharat Takhtani welcomed their second daughter, who they've named Miraya, on June 10 while their elder daughter Radhya was born in 2017.

In the interview, Esha Deol also revealed how the Deols and the Takhtanis are prepping for Miraya's homecoming and said her two daughters will share a redecorated nursery that was previously designed for Radhya: "My sister and I shared a room for a long time, and so did my husband and his younger brother. We are going to get the girls to share the nursery that Noorein (Jumani, interior designer) had designed for us earlier. Now, she has tweaked the interiors to make room for Miraya. The girls are going to share a lot of things, from doll houses to clothes. We are also getting a play room ready."

Getting creative with my buddy and interior designer @nooreinjumani @designvillestudio for the nursery. Planning a vintage white look with lace and creating some sheer magic. #BharatFurnishings #NooreinJumani #DesignVilleStudio

A day after Miraya was born, Esha Deol made the baby announcement with an adorable post on behalf of Radhya, which said: "Welcome to our tribe, baby girl Miraya Takhtani." Speaking to Mumbai Mirror, Esha Deol revealed how excited baby Radhya was about her mom's pregnancy: "The day she figured out my stomach was getting bigger, we told her about the baby and she has been excited about it ever since."

Esha Deol's parents Hema Malini and Dharmendra were spotted outside Mumbai's Hinduja Hospital just a day after Miraya was born. Esha and her younger sister Ahana are trained classical dancers while Esha is also an actress. Esha Deol married businessman Bharat Takhtani in 2012 after which she took a break of sorts from acting.