How cute is this picture of Neha Dhupia and Mehr 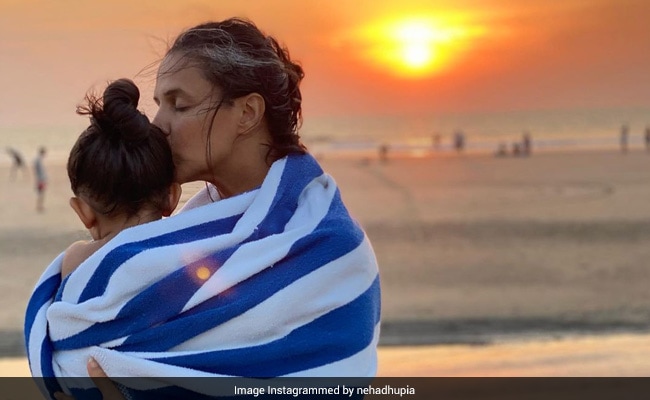 Neha Dhupia shared a gem of a photograph on her Instagram profile on Tuesday. The picture which appears to be from a beach destination, features the mother-daughter duo and cute can't even begin to describe it. In the picture, Neha Dhupia can be seen planting a kiss on her daughter Mehr's head, who can be seen curled up in her arms. She captioned the post: "Magic hour" and she accompanied it with a sun emoji. In the comments section of her post, her Instafam dropped heart emojis. Sophie Choudry dropped three heart emoticons on Neha Dhupia's post.

Neha Dhupia frequently treats her Instafam to super cute pictures of her daughter Mehr. She sent a perfect New Year greeting with husband Angad Bedi and daughter Mehr by her side. She captioned it: "Goodbye 2020 you got us so close to fear that you taught us how to love without fear."

Neha Dhupia married Angad Bedi at a private ceremony in New Delhi in 2018. The couple welcomed their daughter Mehr in the same year. Angad Bedi was last seen in the film Gunjan Saxena: The Kargil Girl, which starred Janhvi Kapoor in the titular role. He also stars in Mum Bhai, which is streaming on ALTBalaji and Zee 5.

In terms of movies, Neha Dhupia  was last seen in the short film Devi, alongside Kajol and Shruti Haasan. She features as one of the gang leaders on TV reality show Roadies Revolution. Neha, a former beauty queen, is best-known for her performances in films such as Singh Is King, Hindi Medium, Tumhari Sulu and Lust Stories among many others. She currently hosts her talk show No Filter Neha Season 5.