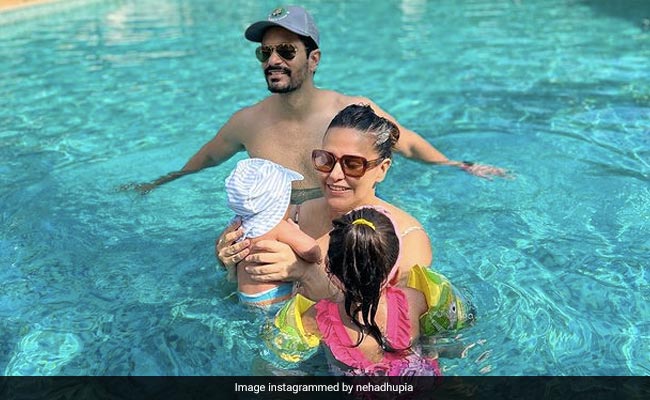 Neha Dhupia shared this photo of her family. (courtesy: nehadhupia)

Neha Dhupia and Angad Bedi, who welcomed their second child, a baby boy last year, revealed their son's name on Saturday. The actress shared a super cute family picture from their pool time. In the picture, Neha can be seen posing with her son, who they have named Gurig. The picture also features Angad Bedi and daughter Mehr. "Our baby boy Guriq. #GuriqSinghDhupiaBedi .... #satnamwaheguru," she wrote. Meanwhile, Angad Bedi posted an Instagram Reel and he wrote:"Guriq Singh! Our lion king Guriq Singh Dhupia Bedi. Pyaar naal you can call him Bedi Sahaab."

Take a look at their posts here:

This is how Angad Bedi shared the news of the baby's arrival. He wrote: "Bedis' boy is here! The almighty today blessed us with a baby boy. Both Neha and the baby are well. Mehr is ready to pass on the "baby" title to the new arrival. Waheguru mehr kare. Neha Dhupia, thank you for being such a warrior through this journey. Let's make it a memorable one for all 4 of us now."