National Awards: "Finally, unfortunately after Sridevi has left, that she has been awarded with this honour" 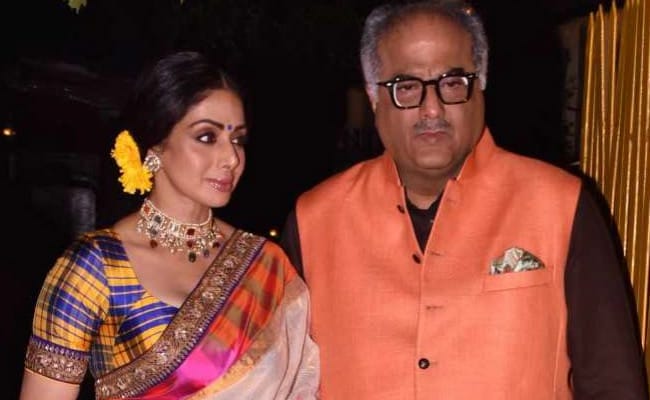 National Awards: "We wish Sridevi was here with us," said Boney Kapoor

New Delhi: Sridevi's filmmaker husband Boney Kapoor said that while it is a "proud moment" for the family, it is "unfortunate" that she was honoured with her first National Film Award after her death. On Thursday, Mr Kapoor was in New Delhi with his two daughters Janhvi and Khushi to receive Sridevi's Best Actress posthumous honour at the 65th National Film Awards. Janhvi wore one of her mother's saree for the occasion, revealed designer and close family friend Manish Malhotra.

When a Doordarshan anchor asked Mr Kapoor to share his sentiments on Sridevi's "second" National Film Award, he corrected her and said: "First, let me correct you. This is her first National Film Award. It is a very proud moment for all us."

"At the same time, a sad moment. We wish she was here with us. She truly deserves it and she has been around for almost 50 years and done almost 300 films," he added.

"She has always given her best to all her films. Finally, unfortunately after she has left, that she has been awarded with this honour," he said.

Sridevi's powerful role as a vengeful mother in the 2017 film Mom fetched her the honour.

In the movie, directed by Ravi Udyawar, Sridevi, whose sudden death in February this year shocked everyone, played a mother who sets out to avenge the rape of her step-daughter, played by Pakistani actress Sajal Ali.

Mr Kapoor expressed his gratitude towards the Indian government, Ministry of Information and Broadcasting and the jury, which was led by Sridevi's Mr. India director Shekhar Kapur.

"It is a very proud moment for all of us but sadly she is not around for this proud moment," he added.

Asked what advice he would like to give to all the young fans who want to be like Sridevi, Boney got his daughters - who were simple and elegant in ethnic wear - forward, and said: "Like my daughters, there are many more young ladies who aspire to be like my late wife Sridevi."

"I would only ask them to be as dedicated as focused as sincere, as hardworking as her," he said.

Mr Kapoor also said Sridevi will be alive forever through her work.