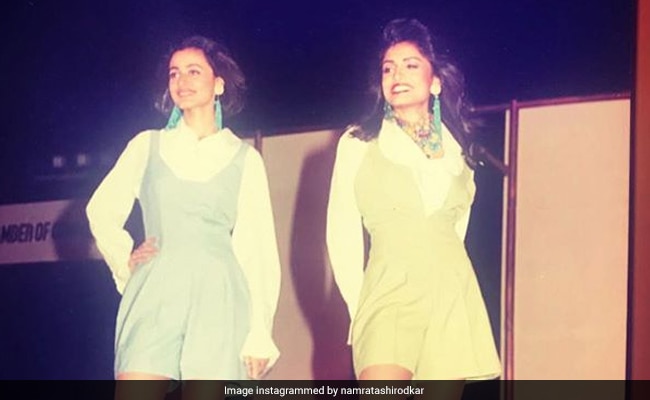 Namrata Shirodkar took a trip down memory lane and returned with priceless pictures from 1993 when she competed for the Miss India pageant along with models Queenie Singh, Arpana Sharma, Beverly Soares (all of whom she tagged in her post). Namrata Shirodkar, who won the Miss India competition that year, shared pictures from the various rounds during the competition, which she described as "#memoriesforlife." She captioned the post, "When your world is a stage TBT!! All about friends... good old days." Actress Pooja Batra, who also competed and stood third in the competition that year, wrote in the comments thread, "Oh wow" while Namrata's sister Shilpa Shirodkar said, "You will always be a star."

When ur world is a stage TBT!! All about friends good old days. !! #memoriesforlife

In 1993, Namrata Shirodkar also represented India at the Miss Universe pageant, where she ranked sixth. After a successful career as a model, Namrata Shirodkar tried her luck with films. She briefly featured in Salman Khan and Twinkle Khanna's Jab Pyaar Kissi Se Hota Hai (her first credited role) while she made her full-fledged Bollywood debut opposite Arshad Warsi in Hero Hindustani.

Namrata Shirodkar is married to Telugu superstar Mahesh Babu, whom she met while filming 2000 film Vamsi. They started dating after the film opened in theatres and got married in 2005. They are parents to son Gautham and daughter Sitara. Namrata Shirodkar hasn't featured in a film after her wedding and her last Hindi film was 2004's Bride and Prejudice while her last onscreen appearance was in Telugu movie Anji.