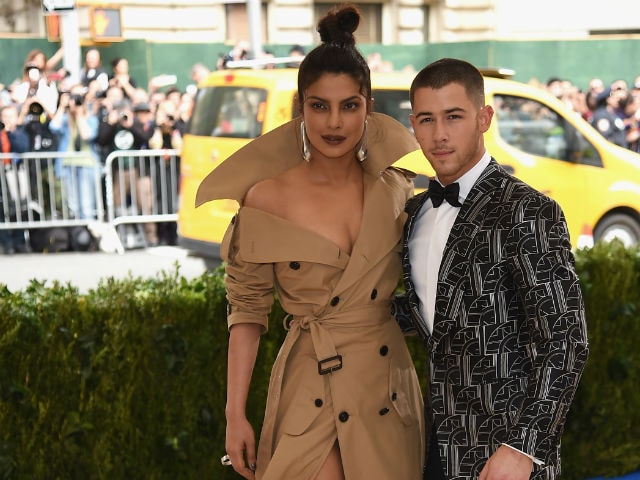 New Delhi: Priyanka Chopra's debut appearance on the red carpet of Met Gala 2017 in New York on Monday night is a hit. The actress chose a thigh-high slit Ralph Lauren trench coat gown for the event and complemented it her look with a black boots. Priyanka, you totally nailed it. Her look reminded us of her character Alex Parrish from Quantico, her American television series. Priyanka, 34, also struck a pose with singer-songwriter Nick Jonas, who was went for a printed Ralph Lauren suit. Meanwhile, Nick also posted a solo picture of Priyanka set against a red and yellow background. See Priyanka through Nick Jonas' lenses:

Nick was also careful of not stepping on Priyanka's gown. Here's the picture.

Twitter too gave a thumbs up to Priyanka's appearance. "Priyanka steals the show," read one of the tweets.

Priyanka, who is now working in Hollywood too, has made various appearances on foreign red carpet such as - Oscars, the Golden Globes and the Emmys.

She recently returned to India from New York after fulfilling her work commitments. Priyanka is making her Hollywood debut with Baywatch, where she features with Dwayne 'The Rock' Johnson. Baywatch releases on June 2 in India. Priyanka is also the star of the show Quantico, which is in its second season now.

Promoted
Listen to the latest songs, only on JioSaavn.com
Deepika Padukone too attended the Met Gala 2017 in a silver silk dress. The event was also attended by celebrities like Jennifer Lopez, Rihanna, Katy Perry and Salma Hayek.

Nick Jonas is best known for his albums like Columbia Records, It's About Time and A Little Bit Longer.

Things Priyanka Chopra Can Use Her Met Gala Dress For, According To Twitter