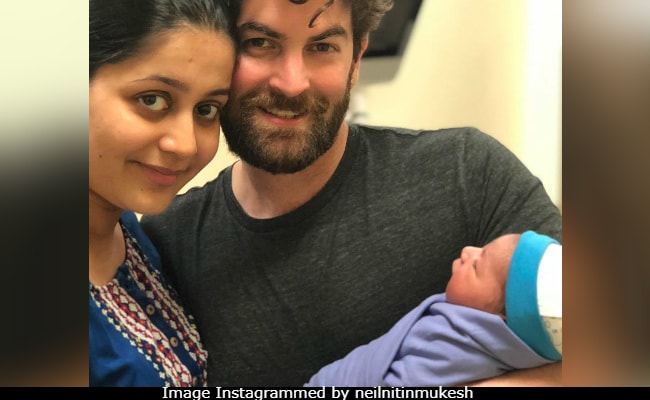 First, congratulations to Neil Nitin Mukesh and his wife Rukmini Sahay! The couple welcomed their first baby - a daughter they've named Nurvi Neil Mukesh - on Thursday and introduced her to fans and followers on social media with a Daughter's Day-special post on Sunday. Sharing the first photos of Nurvi on his Instagram, the 36-year-old father added an adorable caption, which reads: "Now, every day is Daughter's Day!" In one of the photos, baby Nurvi is cuddled in Neil's arms and new mom Rukmini can also be seen joining them in the frame while in another, Nurvi features with just her dad in a cuteness overloaded moment.

Here's how Neil Nitin Mukesh introduced his baby daughter to the world:

Over the weekend, Neil announced the arrival of a new member in the family with this message: "Rukmini and I are proud to announce the arrival of our darling daughter, Nurvi. The entire Mukesh family is elated. Both mother and daughter are well by the grace of god." The actor is the son of singer Nitin Mukesh and grandson of legendary singer Mukesh. Months before he welcomed his baby daughter, Neil Nitin Mukesh had told news agency IANS that the couple are "very excited" for their new roles as parents, adding: "We are okay with a baby girl or a baby boy as long as the baby is healthy."

Rukmini and I are proud to announce the arrival of our darling daughter, Nurvi. The entire Mukesh family is elated. Both mother and daughter are well by the Grace of God pic.twitter.com/CYu8eQjRdK

Neil Nitin Mukesh and Rukmini Sahay had a big fat destination wedding in Udaipur in 2017, over a year after which, the actor made the pregnancy announcement with an adorable post on Instagram.

Now we will be THREE

On the work front, Rohit Shetty's Golmaal Again remains Neil Nitin Mukesh's last big release, in which he was seen in a negative role. He will return to play the villain in the much awaited bilingual film Saaho, in which he will co-star with Baahubali star Prabhas.