Mahira Khan's Viral Pic Pops Up On Cafe Menu And Twitter. Can't. Even

The poster seems to have a photoshopped version of Mahira, who is now with a straw instead of a cigarette, like in the viral pictures 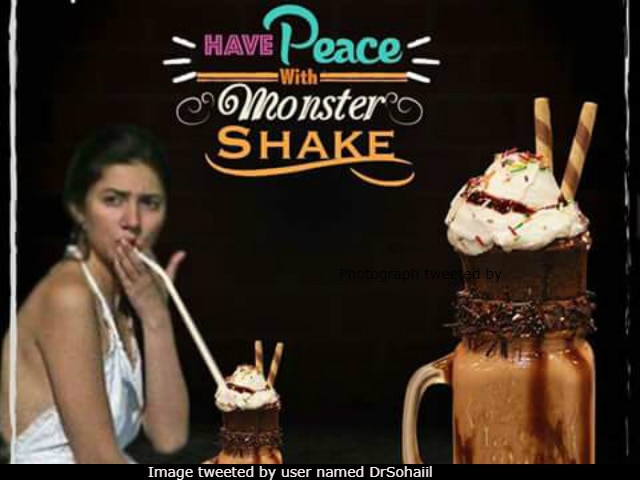 New Delhi: You can run. You can hide. But you can't escape Twitter. Folks on Twitter made Mahira Khan trend yet again after they spotted a photograph of the Pakistani actress on the menu of a cafe. What particularly got Twitter's full attention is the photograph of Mahira that's juxtaposed on the menu is from one of the recently gone viral ones, in which she features with Ranbir Kapoor and can be seen smoking. It appears that Karachi-based Cafe Liquiteria had pictures of the menu (which hve been taken down now) released on social media to promote Monster Shakes - the particular genre of food they seem to be known for. The poster seems to have a photoshopped version of Mahira, who is now with a straw instead of a cigarette, like in the viral pictures. What were you guys thinking really?

Twitter is divided in opinion over whether the cafe menu is worthy of trolling or deserves a round of applause for their marketing strategy. "Cheap marketing tactic by cafe Liquiteria. Every publicity is not a good publicity. What is the message b/w the lines? Women a publicity symbol?" read a tweet while another one added: "Cheap Marketing by Cafe Liquiteria."

Cheap Marketing Tactic By Cafe Liquiteria
Every Publicity Is Not A Good Publicity
Wht Is The Mesage B/w The Line's?Women A Publicity Symbol? pic.twitter.com/sjtOcGVUG2

Promoted
Listen to the latest songs, only on JioSaavn.com
Mahira Khan was ruthlessly trolled over the weekend after certain photographs of hers, in which she can be seen chilling and smoking with Ranbir Kapoor outside a New York cafe surfaced on social media. Haters decided to troll Mahira for smoking and wearing a short dress.

Ranbir Kapoor and Mahira Khan sparked dating rumours after they attended the Global Teacher Prize event in March together, since when dating rumours and have kept the gossip mills occupied.