In March, Ranbir Kapoor and Pakistani actress Mahira Khan were spotted together at the Global Teacher Prize event 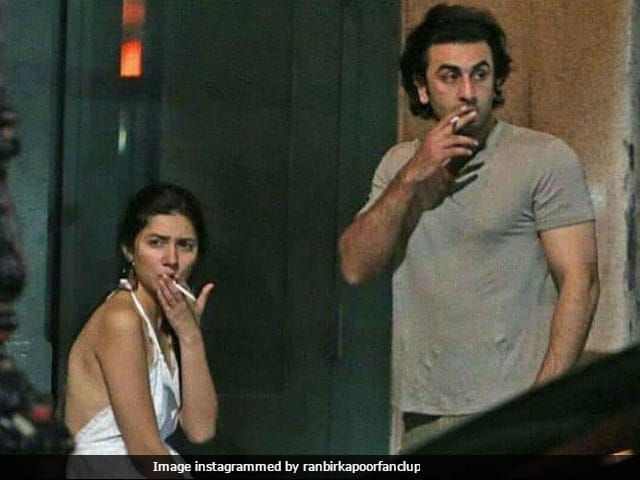 New Delhi: Rumours of Ranbir Kapoor dating Pakistani actress Mahira Khan have been doing the rounds ever since the duo were spotted together at the Global Teacher Prize event in March. Now, photos of Ranbir Kapoor and Mahira Khan are going viral on the Internet after they were spotted chilling together outside a hotel in New York. In the pictures, the 32-year-old actress looks lovely in a white dress while Ranbir is seen wearing a grey t-shirt paired with army green pants. The actors are seen smoking as they engaged in a deep conversation. See the pictures posted by the actors' fans on social media here:

The viral pictures of Ranbir Kapoor and Mahira Khan smoking on the streets of New York were sure to have multiple reactions. Some Twitter users criticized the actress for smoking and wearing a short dress but many others supported her. One tweet read, "Beyond me how people are shaming Mahira Khan for smoking. I don't get it, why you wanna take away her social life? Her informed decision."

Here are some other reactions to Ranbir and Mahira Khan's pictures.

Beyond me how people are shaming Mahira Khan for smoking. I don't get it, why you wanna take away her social life? Her informed decision.

I can't believe that people are actually shaming Mahira Khan on smoking. We are ridiculous.

This generation: Society is so judgmental.

Pictures of Mahira Khan smoking with Ranbir Kapoor turn up on social media.

Here are some negative tweets on the viral pictures

Mahira Khan is so fucking overrated and annoying.

mahira khan totally ruined her decent image with this. so disappointed.

In March, a few videos of Ranbir and Mahira from the Global Teacher Prize event were shared by the 34-year-old actor's fan clubs. In one of the videos, the duo were seen engaged in a conversation, the Pakistani actress appeared to be pleading with Ranbir for something. Several people assumed that a small tiff had taken place between Mahira and Ranbir.

Last year, Ranbir Kapoor had a high-profile break-up with actress Katrina Kaif after their seven-year relationship. After that, when the actor appeared on Karan Johar's chat show Koffee With Karan, he admitted that he doesn't like being single.

Promoted
Listen to the latest songs, only on JioSaavn.com
On the work front, Ranbir Kapoor was last seen in Anurag Basu's Jagga Jasoos along with Katrina Kaif. He will next feature in the untitled Sanjay Dutt biopic, which is being directed by Rajkumar Hirani.

Mahira Khan made her Bollywood debut with Raees, co-starring Shah Rukh Khan. The actress was unable to promote the film in India as the tension between India and Pakistan escalated last year.