Namrata Shirodkar, who is quite active on social media, recently posted an old picture of herself with family 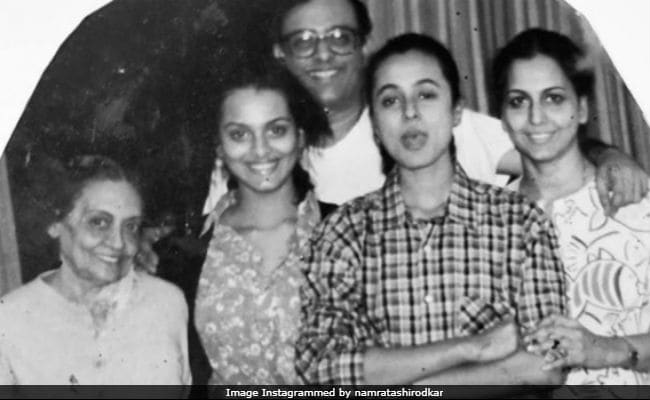 New Delhi: Telugu superstar Mahesh Babu's wife Namrata Shirodkar, who is quite active on social media, recently posted an old picture of herself with her family and captioned it as, "My roots, my reality, my people. The real reason for who I am today. Feeling love, gratitude. Blessed by my makers." Namrata's picture also features her sister Shilpa Shirodkar, an actress. Namrata and Shilpa are granddaughters of veteran actress Meenakshi Shirodkar, who is also part of the picture. "Good to see a picture of Minakshi Shirodkar after a long time," read a comment. Shilpa also shared Namrata's post. See the picture here.

A few days ago, Shilpa Shirodkar delighted with a throwback picture with actresses Madhuri Dixit and Ashwini Bhave. "Some good old memories," she captioned the post.

For everyone who asked for the full picture fun times with @madhuridixitnene and @ashvini.bhave some good old memories

Promoted
Listen to the latest songs, only on JioSaavn.com
Namrata Shirodkar is a former beauty queen and debuted in Bollywood in 1998. She made her debut as a supporting actress in Salman Khan and Twinkle Khanna's 1998 film Jab Pyaar Kisise Hota Hai. She has also featured in films like Vaastav: The Reality, Pukar, Astitva, Dil Vil Pyar Vyar and Bride and Prejudice.

Shilpa Shirodkar has also been part of several films. However, she later shifted her focus to television. She debuted in the TV industry with Ek Mutthi Aasmaan and followed it up with shows like Silsila Pyar Ka and Savitri Devi College & Hospital. She is married to Aparesh Ranjit and has a daughter named Anoushka.