Madhuri Dixit And Umm... Brownie Points If You Recognise The Other Two Actresses

Remember actress Shilpa Shirodkar? She shared a very old picture of herself with actresses Madhuri Dixit and Ashwini Bhave 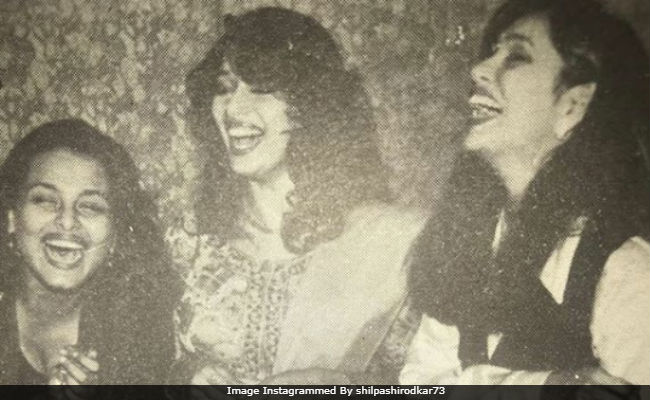 New Delhi: Remember Shilpa Shirodkar? The actress who starred in films like Kishen Kanhaiya and Gopi Kishan (which released in the early 90s), shared a very old picture of herself with actresses Madhuri Dixit and Ashwini Bhave. The picture has been posted by Shilpa's unverified Instagram account, and appears to be taken from a newspaper clipping. It has been captioned as, "For everyone who asked for the full picture. Fun times with Madhuri Dixit and Ashwini Bhave. Some good old memories." Madhuri is dressed beautifully in what appears to be a cream salwar suit and shares a laugh with Shilpa and Ashwini. ('Good old memories.' Yes, indeed).

Here's the picture which Shilpa shared. (It has been liked by Namrata Shirodkar, Shilpa's sister. Namrata is married to Telugu superstar Mahesh Babu).

For everyone who asked for the full picture fun times with @madhuridixitnene and @ashvini.bhave some good old memories

Shilpa Shirodkar, 48, and Madhuri Dixit, 50, are co-stars of films like Kishen Kanhaiya and Mrityudand.

Shilpa Shirodkar has been part of several films and later shifted her focus to television. She debuted in the TV industry with Ek Mutthi Aasmaan and followed it up with Silsila Pyar Ka and Savitri Devi College & Hospital, in which she plays the protagonist's mother. She is married to Aparesh Ranjit and has a daughter named Anoushka.

Promoted
Listen to the latest songs, only on JioSaavn.com
Madhuri Dixit is all set to make her Marathi debut this year with a film titled Bucket List. Meanwhile, she is also prepping for Total Dhamaal, with Anil Kapoor and Ajay Devgn, which went on floors last week. Madhuri Dixit married Sriram Madhav Nene in 1999 and they are parents to sons Raayan and Arin.