"There's no one else I would rather be my weird self with," Anshula wrote for Arjun Kapoor 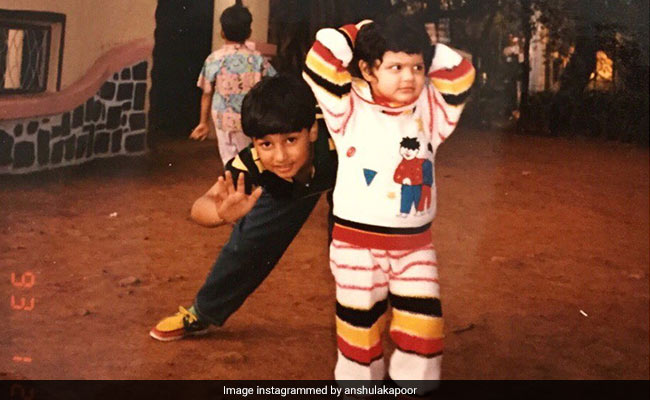 Ahead of Arjun Kapoor's birthday, his sister Anshula posted an adorable childhood photo on Instagram on Monday, which featured the Gunday actor along with her. For those who don't know, Arjun Kapoor's birthday is on June 26. In the picture, the brother-sister duo can be seen in a very playful mood. Sharing the picture, Anshula wrote: "I don't really understand what this pose is but I do know that there's no one else I would rather be my weird self with. (Also please note how your shoe game is on point even in the '90s Arjun Kapoor)." Arjun Kapoor responded to the post and wrote: "I was born to face the camera."

Take a look at the adorable childhood picture of the Arjun and Anshula:

I don't really understand what this pose is, but I do know that there's no one else I would rather be my weird self with. (Also please note how your shoe game is on point even in the '90s @arjunKapoor ) #Number1SinceDay1 #BirthdayWeek #SidelockGameOnPoint #WhyAmIWearingWinterClothesInBombay #LetsRebelAndThrowbackOnAMonday

Arjun Kapoor and Anshula both are fans of throwback pictures, especially childhood photos. Recently, Arjun Kapoor juxtaposed a picture of his mother Mona Shourie with a recent picture of Ashula. He shared the post and described how his sister looks like his mother. In his post, Arjun wrote: "Forget like father like son, it's always like mother like daughter."

A few months ago, Anshula Kapoor posted a childhood picture, in which Arjun Kapoor can be seen carrying Anshula in his arms. Sharing the post, Anshula wrote: "He's always got my back, literally." Take a look at the picture:

Check out more childhood pictures of Arjun Kapoor and Anshula:

You were my smile & I hope wherever you are I make you smile still... it's been 7 years since you left us & all your son is asking you is come back na, please.

Time changes nothing. Love you & miss you everyday Ma. 7 years since we've felt your hugs, heard you laugh or held your hand. Already feels like eternity, but gotta keep on keepin' on, gotta make you proud everyday, gotta keep feeling your love with every heartbeat of our own #AlwaysAndForever

Guys today is throwback Thursday. Today I genuinely felt so conflicted as I woke up wondering if all the madness the chaos is all worth it if ur loved ones aren't ok and aren't a 100 percent. The world ceased to exist for me when my sister wasn't well for the last few days. I missed my mother even more because I felt vulnerable n helpless sitting in Pokhara trying to be professional because that's what an actor is supposed to be in that moment. I realised this week I can handle n face the world as long as my world is fine and the people I care for are ok... otherwise everything kind of feels pointless. This post is just a rambling of thoughts because I realised we are so caught up in trying to run we forget to sometimes just stand breathe n take it all in. I'm grateful n thankful for a lot of things I have seen high s & lows good days and bad days but I know I want to be a more positive person and believe after the dark comes the light and as long as u are by my side I can face it all @anshulakapoor love u and love this really amazing hairstyle u got going back in the day. Ps - all u guys reading this go hug ur parents n siblings even if they get confused with the sudden burst of love n affection.

Arjun Kapoor recently starred in India's Most Wanted, which was directed by Raj Kumar Gupta. The film received mixed reviews from the critics. The actor is currently busy shooting for his next film Panipat, which is a periodic dram and is waiting for the released of Sandeep Aur Pinky Faraar.