On Sridevi's death anniversary, Janhvi wrote: "My heart will always be heavy. But I'll always be smiling because it has you in it." 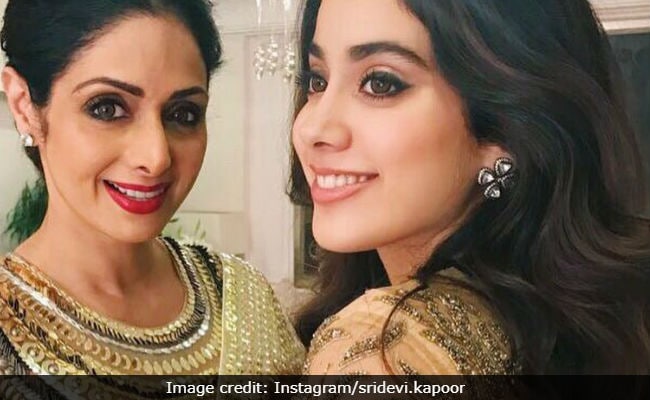 A file photo of Sridevi and her daughter Janhvi Kapoor. (Image courtesy: Instagram)

On Sridevi's death anniversary today, daughter Janhvi Kapoor shared an emotional post on her Instagram page. "My heart will always be heavy. But I'll always be smiling because it has you in it," she wrote and shared an incomplete picture of herself holding her mother's hand. The comments thread on the post filled with teary-eyed emoticons and sweet messages in the memory of the Chandni actress. "Oh... heart-touching, Janhvi Kapoor," wrote an Instagram user while another added: "She will always be in our hearts and also you, Janhvi." Sridevi died by accidentally drowning in the bathtub of her hotel room in Dubai last year. She is survived by her husband Boney Kapoor and daughters Janhvi and Khushi.

Janhvi Kapoor is also an actor. She debuted with Dhadak in 2018 and she's been signed for a biopic on IAF pilot Gunjan Saxena and Karan Johar's Takht. Sridevi died before she could watch Janhvi's debut film.

Sridevi was among the top crop of actress in the Seventies, Eighties and the Nineties. In a career spanning five decades, Sridevi starred in 300 films in Tamil, Telugu, Kannada, Hindi and Malayalam languages. From the film fraternity, actress Shabana Azmi was among the first to remember the late actress on her death anniversary. She wrote: "A year already... Sridevi, you will live on through your work."

Sridevi has starred in critically-acclaimed films like Moondram Pirai (dubbed in Hindi as Sadma), 16 Vayathinile, ChaalBaaz, Chandni and English Vinglish among others. She was last seen in MOM, her 300th film, for which she was awarded Best Actress National Award posthumously.